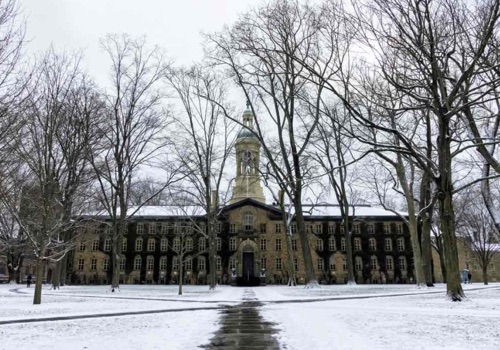 IDEAS AND THEIR CONSEQUENCES:

THE UNFORTUNATE LEGACY OF A

Two hundred years ago this year, in 1816, John Maclean graduated from Princeton (then College of New Jersey). He dedicated his life to Princeton as a professor and then as its president. Founded by the New Light Presbyterians in 1746 to train ministers, Princeton was arguably among the most prestigious and conservative Christian colleges at the time.

A mathematician turned ancient language professor, Maclean was the first and only bachelor president. A devout Presbyterian, he gave his time and energy to the students through the principle of in loco parentis. This centuries-old ideal in education recognizes that God gives fathers the responsibility to educate their children (Ephesians 6), not the government. Maclean watched over those students entrusted to his college and followed their lives even after their time at the school was done. He even went so far as to outlaw Greek fraternities, which he believed had a negative influence on the atmosphere of the campus. As a general policy, he sought a balanced curriculum, believing there was a fundamental body of cultural studies that every educated person should be required to pursue before preparing for a profession.

But, he was also one of the chief architects of New Jersey’s public school system, and an outspoken supporter of non-sectarian, tax-funded public schools where the control was removed from parents and placed into the hands of school boards. His plan was eventually adopted by the state’s legislature. While he believed in education infused with the liberal arts and conducted in loco parentis, he compromised and sought the ideas of his age.

Why? In a nutshell, everyone was doing it. At the time, belief in state control to bring about the common good permeated all areas of life. Public schools, which eventually rejected any religious influence, naturally flowed from this belief. What happens when we violate biblical principles for seemingly good reasons? The answer can be summed up in Richard Weaver’s now famous quote: “Ideas have consequences.” Maclean could hardly have foreseen the cultural shift that would come about over the next 200 years. God’s word often calls us to principles that seem impractical or unnecessary when we are immersed in the routines of our time. As we now know looking back through the decades, times changed.

MacLean would certainly have seen things differently, had he foreseen the consequences.

The ideas are bearing fruit. Parents in New Jersey are marginalized. Recently, a New Jersey government worker knocked on the door of a homeschooling family and questioned them for hours based on an unsubstantiated tip about “improper” homeschooling. In another New Jersey case, parents have been unsuccessful in preventing a law forcing their children to use the restroom unsupervised with students of the opposite sex to accommodate gender identity rights. Maclean would certainly have seen things differently, had he foreseen the consequences. That is why we should seek wisdom. As God reminds us in Proverbs 4:5, “Get wisdom … do not turn away from the words of my mouth.” God’s word is full of good ideas. And, we can enjoy the good consequences if we have the faith to believe that God’s ways are always above man’s ways.