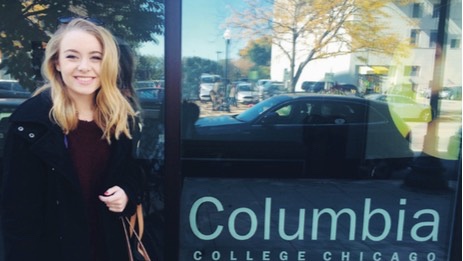 Living with a Classical Christian Education

Who am I? That was the question

I had to answer for

the first assignment in

The professor handed out the guide sheet with a strange twinkle in her eye. I walked back to my dorm in the mild September air, my head heavy in contemplation. How should I approach this? How much detail should I give? This “Who Am I” assignment caused more stress than I think was intended—probably more than for my peers.

For me, the assignment hinged on a deeper question, and I wanted to answer it in an honest, affecting way. In my secular large college, this “Who Am I” speech presented itself as an invitation—a door I just had to open.

My high school was a small classical Christian school. For years I was surrounded and constantly encouraged by fellow Christians walking similar paths. Naturally, I was taught to approach seemingly simple tasks such as this with a different mindset. I knew it would be perfectly fine to present a short summary of my life, show everyone a picture of my dog, and be done with the whole thing. There were many moments where I thought I would do just that. But I always came back around to the idea that it wasn’t enough. Who am I? I knew for a fact I was more than that.

A few days later, my speech was prepared. Since I had given countless speeches in high school, I felt comfortable in my preparation. The time came and I walked up to the front of the classroom. My classmates’ eyes were tired and maybe even bored. So, I began by giving information everyone expected to hear. I told them where I grew up, about my family, what my major was, and who I wanted to be.

I paused and informed them there was one more vitally important piece. I think they all sensed the change in my voice as their postures straightened a bit, expressing their interest in what I had to say. I opened the door I knew needed to be opened from the beginning. I talked about God. How could I not, with an assignment based on an existential question such as this?

Who am I? A broken being in need of a goodness bigger than anything I would ever face. Who am I? Someone who knows there is more to this world than dollar bills and dirt. Who am I? A servant for the kingdom of God. Who am I? A follower of Christ.

Looking back now, I know for a fact I could not have taken a step like this without the proper foundation and training. Doing so put me under a spotlight in a place where I could have potentially felt very much alone. The formal education I received for an assignment like this, along with the spiritual guidance and growth that took place in my high school years, brought me to a place of strength. For this difference, I am most grateful.

CAYLN JONES attends Columbia College in Chicago. She is a graduate of Redeemer Classical Academy in Murfreesboro, TN.