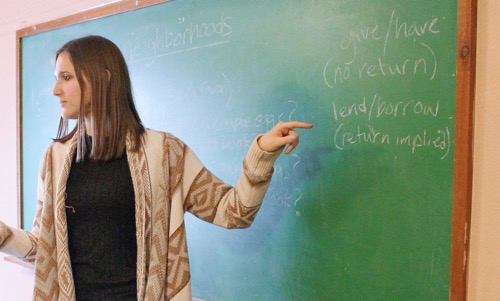 Elizabeth Wade has no concept of color—literally. She was born with achromatopsia, a disorder characterized by light sensitivity and the absence of color vision. Direct sunlight impairs her vision. She cannot drive. But these limitations, she says, matter little.

As a result, Elizabeth has learned to see things differently–to look past appearances into the heart. Seeing only goes so far. She’d rather listen, anyway. That, she says, is her life’s goal.

Elizabeth joined Covenant Classical School (CCS) in Fort Worth, Texas, in fifth grade and was the school’s first graduate in 2007. She enjoyed math and literature, and wrestled through Latin, not yet aware of the impact language would have on her life.

There were challenges to being a pioneer at a newly formed school. “I felt pressure to be something for everyone, but there also was grace for me because I was first,” she says.

One of her favorite teachers, Mr. Bates, noticed Elizabeth’s heart for different cultures and suggested she attend a missions class called “Perspectives” at a local church. Bates thought the class would bring her goals into sharper focus, and later suggested that she pursue an anthropology degree. “Covenant was very influential in what I chose to study in college and what I’ve done since,” Elizabeth says.

A FOREIGNER IN A FOREIGN LAND

While the women learned English, Elizabeth learned hospitality. The refugees were warm and welcoming, inviting her into their homes and lives. “These people with nothing were overwhelmingly generous. I knew I wanted to work with refugee resettlement once I got home,” she says.

A HEART FOR THE DISPLACED

After graduation, Elizabeth returned to Fort Worth as an administrative case-worker for World Relief, an organization that serves newly arrived refugees. She helped with food stamps and physician referrals, but had limited refugee contact because she cannot drive.

But God saw another way. Elizabeth moved into an apartment complex that housed more than 1,000 refugees. She shared an apartment with two Christian refugees: a young Iraqi woman and a woman who had been a senator in Burundi before fleeing her country. Living among refugees helped Elizabeth see things differently. Again. “Most refugees’ biggest complaint is that they’ve never been invited into an American home. In Indonesia, I’d been welcomed. I knew we could do better here,” she says.

THE LANGUAGE OF LOVE

Before long, Elizabeth felt the call to return overseas to the Middle East. (To protect mission work in the region, the organization and location cannot be named.) Elizabeth’s official reason for being there was to learn Arabic, and she attended 16 hours of one-on-one lessons each week. Her efforts to speak the language of her host country opened doors. Little by little, she built friendships and shared the gospel.

Once Elizabeth was engaged in the students’ lives, she was able to see the darkness that surrounded them. Elizabeth recalls a difficult time after ISIS beheaded the Egyptian Coptic Christians in early 2015. She worried about the danger of sharing the gospel.

But the doubling down of evangelical efforts by the local church energized Elizabeth. “A lot of Americans are cultural Christians, but not actual followers of Christ,” Wade points out. “In the Middle East, Christians are willing to lay everything down to follow Jesus.”

Elizabeth prays every day about future mission work. In the meantime, she enjoys teaching ESL classes back in her hometown of Fort Worth. When asked whether learning Latin, Indonesian, or Arabic–or teaching ESL–is the most difficult, Elizabeth laughs. “Latin! I hope that doesn’t get me in trouble! It’s hard to see the benefits at first, but you notice later,” she says.

Looking back on her education, Elizabeth knows God used it to shape her life and direction. Her advice for current students? Take the long view. “Life is not about grades or being the best,” she says. “View your education as a tool to help you seek God and love others first.”