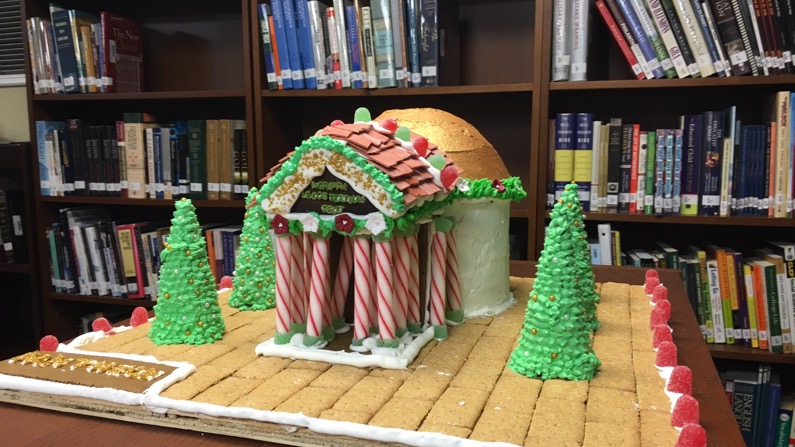 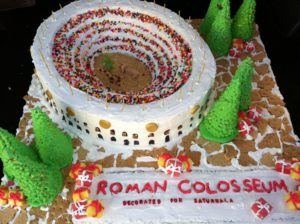 For the past decade, the GA Classical League has been rebuilding Rome in gingerbread and has brought home the title four times: twice for the Colosseum, once for the Trojan Horse, and once for the Pantheon.

Each year, they construct an ancient piece of classical architecture entirely of edible materials—per contest rules. The students first created a Roman domus (townhouse). While their entry didn’t win, the students so loved the project that the next year they upped their game, taking on the Colosseum and bringing home their first title. They even received a “colossal” spread in the local newspaper.

Each project is planned and executed with the intention of learning about ancient design and architecture. Lessons in engineering, history, culture, and religion all play a part. Ashton Murphy, a student at NYU law school and former Grace Academy student who worked on the first Colosseum, recalls, “I loved building the Colosseum with the naumachiae (naval battle). It was really awesome imagining the Romans seeing such a spectacle and recreating the little details to make the project come to life.”

The tradition continues to engage the students in learning, connect the school with the community, and best of all provide a unique and creative time for enjoying fellowship while baking memories. 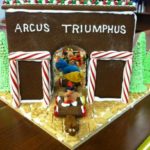 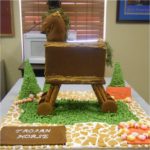 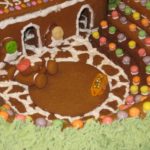 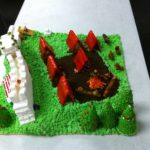 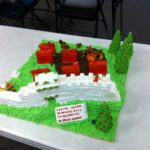 For the past decade Grace Academy has been rebuilding Rome in gingerbread. Each year the members of the GA Classical League recreate an ancient piece of classical architecture entirely out of edible materials. The impetus for this idea was the Georgetown Library’s annual Gingerbread House Contest. Karen Moore and her students first created a Roman domus (town house) as an entry for the contest in 2005. This lesson in architecture and interior design was an extension of class lessons on Roman housing. While their entry didn’t win, the students so loved the project that the next year they wanted to up their game and take on the Colosseum.

The secret behind most truly creative and wonderful class projects is an awesome class mom with skills. For the next round of competition and creative learning, the team found a secret weapon in Lacy Murphy. Lacy’s daughter Ashton was in fifth grade when her class created the gingerbread domus. Lacy has some serious cake skills, having taken several classes on the art of cake decorating and in demand for birthday cakes within the community. Lacy and Karen would become the dynamic duo of ancient gingerbread architecture as Karen planned lessons and Lacy planned culinary construction around each project. Since the design of football stadiums are based on the ancient Roman amphitheaters, the design worked perfectly. The project plans use many attributes of the design and décor of the Colosseum. Lessons in architecture, engineering, history, culture, and religion all played a part. For example, in each arch of the colosseum was placed a miniature gingerbread man in place of the statues the original held. The inner floor was filled with a substance to imitate water so we could state the ancient naumachiae, naval battles, held inside the colossal stadium. The top of the Colosseum displayed the bronze discs placed there by Domitian. While the plans are laid out by Murphy & Moore, it is the students who take on the sticky sugary task of making it all happen, and they do take artistic license as they add their own touches. For example, the students did take a bit of artistic liberty with the great velum, an awning that sailors would extend over the stadium seating. They placed poles of spaghetti noodles around the top with rice paper flags bearing the university football teams around Texas. Now a student at NYU law school Ashton recalls, “I loved building the Colosseum with the naumachiae (naval battle). It was really awesome imagining the Romans seeing such a spectacle and recreating the little details to make the project come to life.” The Colosseum won the contest that year and even received a colossal spread in the local newspaper.

In the years since the first domus, the Grace Academy Classical League has created the Roman Colosseum (twice), the Pantheon (twice), the Trojan Horse, a Greek Theatre, Hadrian’s Wall (complete with Roman camp and little blue Celtic spies), a triumphal procession, and the Circus Maximus. Each construction was built entirely out of edible materials (per contest rules) and each project was planned and executed with the intention of learning about ancient design and architecture. Grace Academy alumnus, Josh Patch, recalls that these projects “made all that Roman history stick with me. That was when I first learned how the Romans decorated trees for Saturnalia, how they used to fill up the colosseum with water for mock sea-battles, why there’s a hole in the top of the Pantheon, how a Roman villa is laid out, etc.”

As for the Georgetown Library’s Gingerbread Contest, in ten years of competition, the Grace Academy team has won four times: twice for the Colosseum, once for the Trojan Horse, and once for the Pantheon. Throughout the years their entries seemed to inspire other creations in the community as entries grew beyond the traditional candy houses to include such creations such as a cathedral, the Globe Theatre, and even the Alamo (who could forget that one?). In fact, the library decided to change the name of their contest to the Edible Extravaganza to better reflect the growing variety of edible edifices. This tradition continues to be one that engages our students in learning, engages our school with the community, and best of all provides a unique and creative time for enjoying fellowship while baking memories.