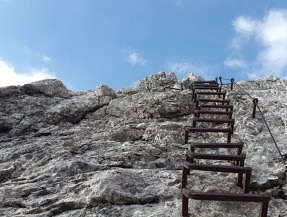  Why professors leave their

college classrooms to teach at

ON ANY GIVEN SATURDAY in the spring, you’ll likely find Grant Horner kicking his crampons into the ice at 14,000 feet as he ascends one of California’s many challenging peaks.

Monday morning, he guides undergraduates at The Masters College through the Italian and English Renaissance. And on Tuesday, he’ll counsel rhetoric students at Trinity Classical School in Valencia, CA.

Dr. Horner is one of a growing number of college professors who have breached the traditional wall between K–12 education and college. As a rule, primary and secondary education have been separate academic domains—but classical Christian schools are changing that. Why would significant numbers of college professors want to help establish, volunteer for, and teach at classical Christian schools around the country?

Dr. Horner explains his dedication. “When classically educated students show up in my college classrooms I know they have the skills in place to read, speak, and write well, and they will have the passion for culture and the critical faculties to think about human works discerningly and theologically … I sometimes describe to my graduate Latin students how we teach the Aeneid in the original language to kids in eleventh grade at Trinity, and it is a joy to watch their jaws drop.” Dr. Horner is not alone.

“As a professor at Wheaton College, I saw far too many bright freshmen coming in who had never been exposed to the great books except at the most superficial (i.e., Sparknotes) level.” Dr. Nicholas Perrin is Dean of the Graduate School at Wheaton. He also helped found and occasionally teaches Latin at Covenant Classical School, a K–12 school in Naperville, Illinois. “Again, high-ACT kids, but who had never been taught to appreciate literature as literature, art as art, beauty as beauty. One of the reasons I went into CCE was because I saw the difference the educational model was already making in my own kids’ lives, and I wanted a different future for them.”

In 2002, Steve Turley retired as a professional guitarist, earned a PhD from Durham University, and decided to find a “real job.” He thought he would teach college at Eastern University but, over the next several years while teaching at Tall Oaks Classical School in Delaware, he discovered classical Christian education. He also found that he was utterly amazed at the fruit of classical Christian education. “I found out very quickly that when I wrote a logic equation on the board or made an argument for this or that, the students were able to immediately recognize a number of the formal and informal fallacies that plagued my thinking. Or when I made comparisons between Greek and Latin that weren’t quite accurate, the students were quick to pick up on it. But it is not just the intellectual vitality of the school that impressed me. I found that the students … were actually good students, and as a part-time professor at a university for nearly two decades, I can tell you that good students are becoming hard to come by.”

College professors typically teach 9–12 hours per week, have flexible schedules, and only grade a few assignments per semester. Teaching K–12 is a bit more of a commitment. High school teachers typically put 25-30 hours into the classroom and grade work nightly. So, as many college professors switch to the classical Christian realm, and many more work part-time or labor to start classical Christian schools, one wonders why? More work, less pay, less status … it must be kingdom work.

In the mid 2000s, Dr. David Diener taught at the University of Indiana when his wife attended a homeschool conference. She came home with a business card from a classical Christian K–12 educator. Diener discarded it. The next year, she brought home a card from him again. This time Dr. Diener looked at the material his wife brought home and was intrigued. Fast forward a few years, and he had left the college world to run a classical Christian school in Georgetown, Texas. Why?

“When I did my teaching demonstration at the college, I gave a talk on what is Christian philosophy. Only two of the students had read Plato. The general tenor of the class was not intellectual. Several walked in late. They just weren’t that interested. Then I was supposed to teach at Covenant—a ninth grade history class. I said, ‘What do you want me to teach?’ ‘We’re doing the Middle Ages, and I don’t think we did a good job with scholastic philosophy. If you could do something on universalism vs. nominalism, that would be great.’ My jaw dropped open. This is a ninth grade history class. All could read Latin. They’d all read Plato. They knew Descartes. As I was talking, they just tracked. They asked me questions that blew me away. For weeks afterward, I thought about that question from a ninth grader. The level of education that I can do here is, simply put, higher than I could do with those undergraduates.”

Dr. Scott Yenor, a full-time professor of political philosophy at Boise State University set aside time, for very little money, to teach sixth grade history for several years at a classical Christian school in Boise, ID. “College students have their habits formed already, and education seems to be checking boxes and passing through classes. Sixth graders, especially sixth graders in classical Christian schools, are open to learning, are genuinely interested in improving their minds, and love stories in a way that college students do not. When I look back on teaching, I cannot believe how much those kids did in my classes.”

In Wheaton, IL, Princeton, NJ, Grove City, PA, Annapolis, MD, and other college towns, classical Christian schools are thriving. The academic world continues to become less influential as it struggles to decide if it trains workers or forms citizens. Either way, they rarely cultivate a Christian worldview. As Dr. Diener puts it, “The kind of academic and spiritual community at a classical Christian K–12 school is a closer reflection of the universities of the Middle Ages, or liberal arts colleges of 150 years ago, than almost anything that’s happening at the college level today.”