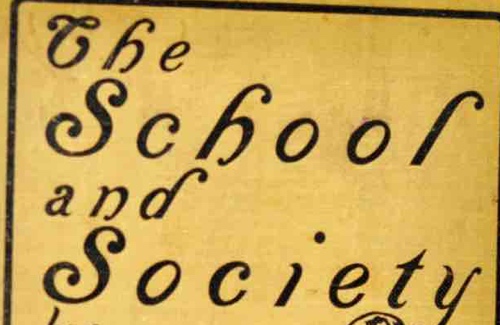 Quotes are from The School and Society by John Dewey.

In this year, a century ago, The School and Society

was published by John Dewey, the father of

There has not been a more important contribution to educational reform than Dewey’s “School and Society.”
—Elementary School Record

What progressive educators set out to accomplish with education …

“What the best and wisest parent wants for his own child, that must the community want for all of its children… Here individualism and socialism are as one …”

“It is to this, then, that I especially ask your attention: the effort to conceive what roughly may be termed the ‘New Education’ in the light of larger changes in society.”

How education became about our jobs, rather than our love of Christ …

“It is our present education [classical Christian at the time this was written] which is … dominated almost entirely by the mediaeval conception of learning. It is something which appeals for the most part simply to the intellectual aspect of our natures, our desire to learn, to accumulate information, and to get control of the symbols of learning; not to our impulses and tendencies to make, to do, to create, to produce …”

“The simple facts of the case are that in the great majority of human beings the distinctively intellectual interest is not dominant. They have the so-called practical impulse and disposition …”

“[The school’s] task is the problem of viewing the education of the child in the light of the principles of mental activity and processes of growth made known by modern psychology.”

The most notable thing about the The School and Society is the worldview it planted in generations of children. It assumes there is no God and that socialism is the best framework for society. These two ideas permeate every line and every classroom, so that if you reject this framework you began to feel foolish.

Dewey lived in an optimistic time. Progressive educators believed we had evolved to the point where man could shed his restrictive mantle of religion and build society through reason and action. What we call materialism and socialism were to Dewey simply new and exciting ideas.

But they were not right. Hopefully, as we analyze their mistakes and experiments through the lens of history and God’s word, we can humbly sift through the good and the bad. Classical Christian schools around the country work daily to repair the damage.

Until 1942, students in American schools said a “pledge” similar to the pledge of allegiance, but without “under God.” This salute became suddenly unpopular when the National Socialist Party in Germany started to use it.