Classical Schools – When Christianity is Silenced 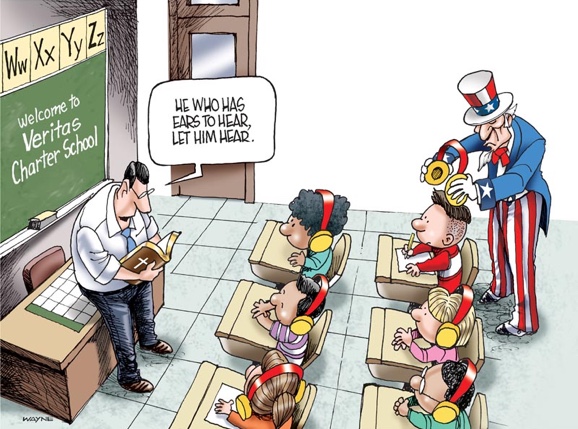 What happens when Christianity is silenced? 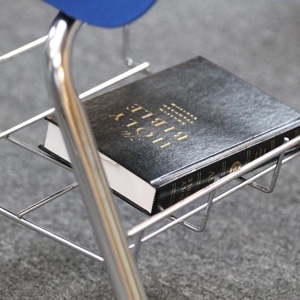 That airliner you flew on last month had 5000 gallons of explosive jet fuel in the wings. Before you got on it, you must have trusted that the aircraft was working as designed. In the same way, with the exceptional power of classical education comes exceptional danger. The DNA of classical education—what makes it tick, what makes it work—is the cultivation of a paideia in pursuit of the Logos. This is a much bigger and more dangerous goal than preparing students for college. Why?

“What will justify your life?” is engraved over the entrance of Ridgeview Classical School, one of the most successful charter schools in Colorado. The mission of Great Hearts Classical Charter School in Arizona is to graduate “young men and women who possess a sense of destiny and purpose that is directed to the service of the greater good.” These, and countless other secular and public schools across the country, have discovered the strength of classical education to cultivate virtue. But how far can classical education be removed from God before it becomes something else?

In his new book Making Sense of God, Timothy Keller, New York Times best-selling author and pastor, recounts the story of a public school teacher who was frustrated with the various “character education” curricula that strictly forbade her to bring religious justifications for any of the values being taught.

For classical educators, this teacher expresses only the beginning of a much bigger problem. The assumption is that “character education” is a subject of its own that you teach, like math or literature. In fact, the root of ALL education is virtue. 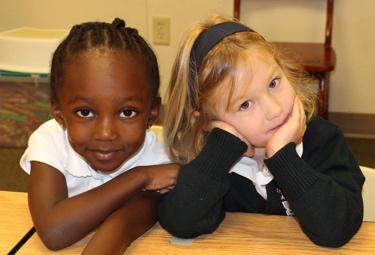 In February of 2013, in a high school class at one of the nation’s largest secular classical school chains, a discussion was held. It was very impressive, but an unusual turn of events shed light on a problem.

Earlier that week, in a class at a classical Christian school, juniors were discussing a passage midway through Dostoyevsky’s Brothers Karamazov. The Christian discussion was rich with the teacher guiding students through some deep stuff: the burden free will creates, the purpose of suffering in God’s creation, and a beautiful depiction of love as the ultimate conqueror. She framed the work in the theological system of the author, a deep and reflective Christianity. 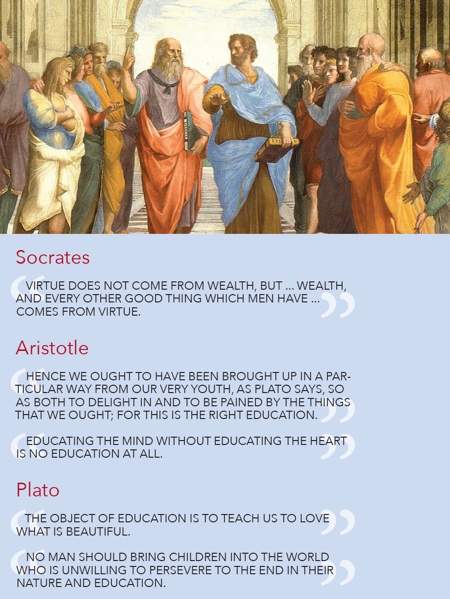 THE DESTINATION & THE PATH

The students engaged in a spirited discussion, seeking the truth—free to express their thoughts and opinions, but not limited by them. In this classroom,the Logos was the living person of Jesus Christ.

Back at the secular classical school, students gathered around a table to discuss, by some turn of fate, the same book, near the same passage! What followed said volumes. The teacher began the discussion and then stepped back. Mormon and Roman Catholic views, along with a variety of indiscernible positions, were suggested by students.

There the discussion remained—an exploration rather than a destination. The teacher could not step in and guide spiritually because he was forbidden to advocate for “religious” ideas. The discussion could only change topics, not delve deeper. Christian theology was out. And, without theology, philosophy is neutered. All that was left for the students in the class was to pool their youthful “wisdom” and wander through questions about ultimate meaning with their 17- and 18-year-old peers.

It seems that non-Christian classical schools know they’re about something big—something eternal. Many teachers and administrators at these schools would prefer to openly discuss God as the source of morality and truth, but the length of their chain keeps them from the true power of classical education. The danger of these schools, cut off from the truth system of Christ, is that they will create a destination (called paideia) with no path to it. They cannot view the world rightly because the path (the Logos) is unknowable. This can cause a devastating wobble in the lives of kids. To understand why, we must first understand the centerpiece of classical education: the Logos.

The Importance of Two Words

Paideia is like a worldview, but more than a worldview. Paideia is an ordered set of desires, a base of knowledge and beliefs, a collection of virtues, and a way of seeing the world that is cultivated into children. We absorb it more than we learn it. Ultimately, paideia translates into the way you live as an adult and is the destination of all classical education.

The original Greek purpose of intentionally shaping the paideia through formal classical education required the pursuit of something called the Logos. The Logos is the transcendent, divine ideal—like the ideas of justice, love, or reason—all of which are imperfectly reflected in our world. Our path to paideia is through a divine, perfect version of the Logos.

Since we can’t fully experience divine justice or infinity or reason directly, we use words to describe them. This is why Logos is often translated “word” in English (as in John 1). The closer we can get to understanding the Logos, the better we can understand classical education.

The Apostle John lived and ministered in Greek education centers. In John 1, this shows as he writes, “In the beginning was the Logos, and the Logos was with God, and the Logos was God … And the Logos became flesh and dwelt among us, and we have seen His glory … grace and truth came through Jesus Christ.” John is speaking into a classical world that had a strong idea of the importance of the Logos, but was lost in the futility of truth without Christ.

Christian parents who fail to realize this foundational issue often see non-Christian classical schools as “the next best thing.” So, they choose a classical private prep school, a magnet school, or a charter classical school. They reason that any classical school is better than the alternative. True, classical schools have proven to be more effective at many things than their conventional counterparts—but there’s a reason for this, and a danger in it.

Without Christ, classical education’s core questions—“what is truth?” and “why am I here?” and “how shall I live?”—cannot be answered truthfully. Jesus Christ is not a part that can be safely extracted from classical education and taught at home. He’s integral to the nature of the thing. If He is removed, we run the risk of creating the ugliness of a person without a face, a soul without love, a truth without the author of truth.

In this context, non-Christian classical schools, like old-line private schools or newer charter schools, have an even bigger problem. They buy wholesale into education as the “cultivation of virtue.” But, now they’ve created a taller ladder and they have no wall to place it against—a destination without a path.

They might argue this is the goal, and that parents can fill this hole at home and at church. But can they? Again, this assumes faith is separate from the real world—faith is a personal thing to be done at home while math, science, literature, history, philosophy, theology, logic, rhetoric (and even daily life) are subjects we can “do” without reference to the author of Truth.

As the humanist Charles Potter said, “What can theistic Sunday-schools, meeting for an hour once a week and teaching only a fraction of the children, do to stem the tide of a five-day program of humanistic teaching?”

For that matter, if classical Christian schools forget the true purpose of edu cation and become college preparatory schools or simply “safe-havens,” we will join other schools in their dilemma.

Jonathan Edwards observed, “Truth is the agreement of our ideas with the ideas of God.” G.K. Chesterton said that “Education is not a subject, and does not deal in subjects. It is instead a transfer of a way of life.” What way of life do you want to transfer to your children? What Truth do you want them to know?

Charter Schools in the News

Recently, a Minnesota classical charter school made headlines with the transgender issue.

A kindergartener who claimed to be transgender has now forced, through a complaint with a regulatory agency, a classical charter school to add curriculum on gender identity. We think few public schools would be under that much regulatory pressure… 1

In another headliner, an Idaho classical charter school lost their battle with the state over the use of the Bible as a historical text.

A defunct Idaho charter school exhausted its appeals Monday in a legal battle with state officials who barred the use of the Bible and other religious texts as a historical teaching tool in the classroom.

The U.S. Supreme Court banned ceremonial school Bible readings in 1963 but said “the Bible is worthy of study for its literary and historic qualities” so long as material is “presented objectively as part of a secular program of education.” However, at least 37 states have state constitutional prohibitions (called Blaine Amendments) that go even further in forbidding religious teaching of any kind in both public and charter schools. One of these amendments was used to close the charter school in Idaho.

Charter Schools at a Glance

Over the following 25 years, the charter movement has expanded to include 43 states plus the District of Columbia, 6,700 schools, and over 2.5 million students—about 5 percent of the total K–12 public student population.

BECAUSE THEY ARE PUBLIC SCHOOLS, CHARTER SCHOOLS:

• Are open to all children.
• Are funded by local, state, and federal tax dollars based on student enrollment.
• Are typically required to meet all state and federal education standards.
• Cannot teach religious content.

According to the National Alliance for Public Charter Schools, “Charter schools are unique public schools that are allowed the freedom to be more innovative while being held accountable for advancing student achievement.”

Join an 18th century American family in their education decision for their child. First, they would ask “what can we do ourselves” (homeschool). This typically meant that their children would be educated by dad or mom, or at a local equivalent of a co-op until about the age of 8. Then, at about 9 years old, “Who can we afford to hire to educate beyond our ability at home?” Sometimes, this was a tutor. Sometimes a nearby classical Christian school. Sometimes, it meant a classical Christian boarding school. Notably absent was any discussion of a non-Christian school. Why? Because all education was for living the good (virtuous) life, not for earning a living. Earning a living was just as important in 1750 in America as now. Maybe more so. But parents realized that a good education led to many other opportunities. It didn’t need to expressly pursue a job.