Read more: Why do we study the Greeks so much? ~by Louis Markos

We can’t go back to ancient Greece, but occasionally we can find small windows into their world by looking at their language. Their words tell us how they categorize the world. And their categories give us glimpses into their culture that make us ask important questions, such as: Why don’t we have a word for that? 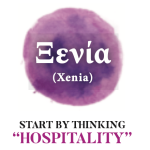 We first meet the Weasley family from the Harry Potter series when Mrs. Weasley helps Harry find platform “nine and three quarters” and Ron and the twins help Harry with his trunk. They do all this before they know he is more or less a celebrity, which establishes them as generous people. If J.K. Rowling had the word xenia in her vocabulary, she would have used it to describe the Weasleys. Xenia means guest-friendship, the relationship created by the hospitality exchanged between a guest and host. In the ancient world, this concept was very important and relatively complex — we’re not talking about inviting your neighbors for dinner once or twice — because the cultural expectation was that you lodge and feed people, no invitation or RSVP required. If a child were to ask such a silly question as why his parents did this, their answer would be something like, “because you never know when one of the gods might come to our door in disguise.” Incognito visits from the gods was a common trope in reference to xenia; that’s why I think it applies to the Weasleys who help Harry before knowing who he is. Although the thought of gods coming to visit (or celebrities, for that matter) may seem irrelevant today, it does put Hebrews 13:2 in a new light.

“I’m dishonest, and a dishonest man you can always trust to be dishonest.” Surely this quote proves that Captain Jack Sparrow has about as little credibility as possible. If we hold our clever pirate up to Aristotle’s three rhetorical devices (logos, pathos, and ethos) he certainly lacks in ethos—as it refers to credibility or expertise. But in another sense of the word, Sparrow’s ethos is captured in the quote above perfectly. It means someone’s entire persona: their character, customs, habits, disposition, attitudes. It can even refer to a group of people. We have words for inner character and words for outward appearances, but not one that refers to a person or group of people as a whole in the same way. Pirates of the Caribbean hits the nail right on the head when it comes to Jack Sparrows’ ethos here. He’s clever, he’s confident, he usually wouldn’t pass a breathalyzer, he’s a pirate. 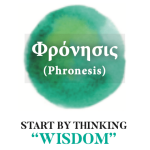 “Go not to the elves for counsel, for they will say both no and yes,” says Frodo in The Fellowship of the Ring. It is ironic that Frodo finds that the elves’ counsel may not give clear direction, because Tolkien himself calls the elves “the wise.”Phronesis is the Greek word for the cardinal virtue we call prudence—which we don’t use in everyday speech. We sometimes use “wise,” but that word is broad. “Wise” can refer to the elves who are well educated; it sometimes refers to smart minds; it often refers to someone who speaks the language of inspirational quotes. But how often do we want to describe someone who, when faced with a difficult decision, can be trusted to simply choose the best way? Phronesis is the word we need. It is a more practical wisdom, such as knowing the best course of action in a given situation. The Greeks have a different word for wisdom (σοφία) in reference to wisdom of the mind, and even though the two types overlap sometimes, phronesis is perfect when we want to describe hobbit-wisdom. Whereas Sam and Frodo might not be called wise in the way the elves are wise, the word phronesis does describe Sam and Frodo, who have the virtue of practical wisdom.

Elise Goodwin is a graduate of The Ambrose School in Meridian, ID, and a student at New Saint Andrews College.