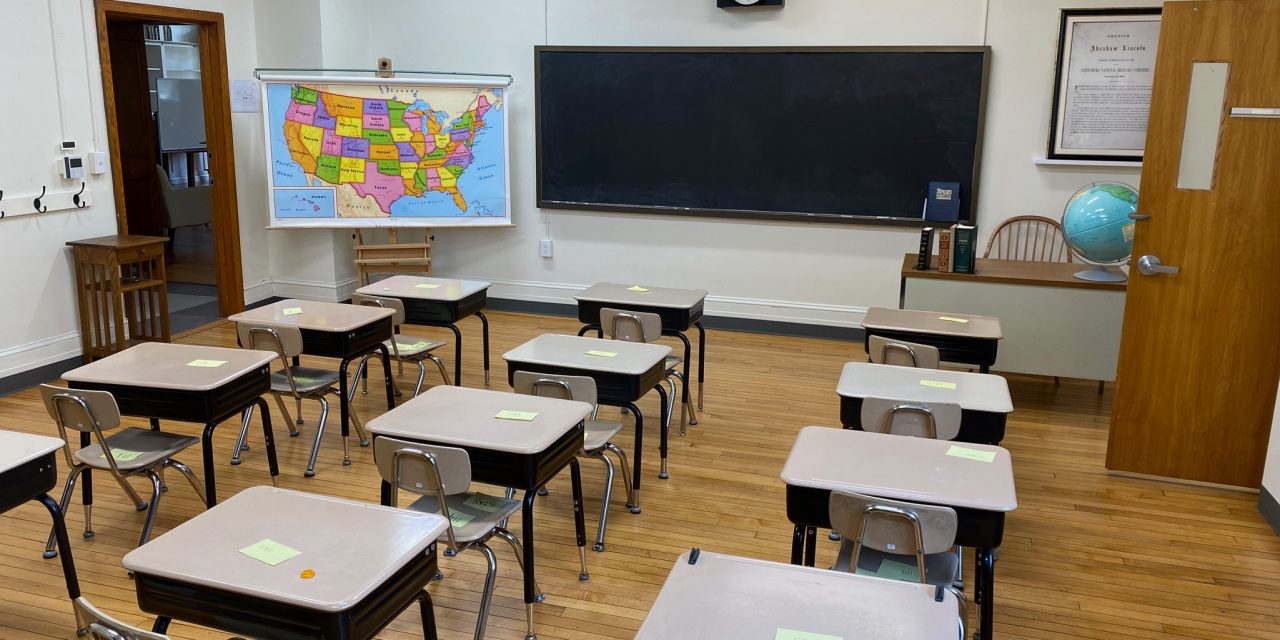 A New Documentary | The Miseducation of America

I bought an old motorhome once. It wasn’t long before the door didn’t quite close. We made do with a bungie cord. !en the tires blew. The cab over the front seats started to sag. When the engine quit, I realized it was time to get to the bottom of things. I was invested in the ol’ girl, and needed to figure it out.

Maybe you’ve had a project like this. You try to fix a simple misfit door, and you find the door frame is bent because water rotted the ceiling above it because the roof was bad which also led to rot over the cab, and the tires rotted from the same elements, along with most of the rubber parts of the engine. !e root problem was years of neglect that weren’t quite visible when I bought it.

I had a similar experience when I first engaged the question of school in America. To be more specific, I started out looking at a discordant culture in the 90s and found out the story led to education. But, there was one big difference: When I got to the bottom of education’s problem, it turned out that the rot had a more sinister cause than simple neglect. This June, a new book will release from Harper Collins: Battle for the American Mind: Uprooting A Century of Miseducation. I co-authored the work with Pete Hegseth of FOX News following The Miseducation of America documentary. I started the manuscript in the mid-2000s, and with Pete’s help, the book’s thesis shaped up: Something is deeply wrong in American culture, and the cause is not what I expected. The historical investigation that ensued sent me across three centuries and took a decade of research to unravel.

Why are colleges abandoning the SAT, even after it was overhauled in 2016? Where did the Pledge of Allegiance come from and what did it replace in America’s schools? How did the Progressive experiment with education lead to the 18th Amendment to the Constitution, against all odds? What motivated John Dewey, the father of modern American education, to completely overhaul education in the “First decades of the 20th century? Most critically, how do all of these things come together to explain where we are today?

The investigation revealed something even more consequential: The progressives intentionally removed an ingredient from our schools that was essential for self-governance.

If you remember Jurassic Park, one minor subplot was the Lysine Contingency. In the movie, scientists genetically removed the ability for the dinosaurs to make an enzyme they needed to live. Then, the keepers fed them the lysine they needed. By doing this, they controlled them. In a way, this is what progressives did to the educational system in the U.S. They removed the one ingredient necessary for a republic to govern itself. Without the Western Christian Paideia, we now find our republic in peril, controlled by a progressive narrative.

When FOX did the documentary, it seemed we could tell the story to a broader audience if Hegseth offered his insights into culture and our modern state. So, while the book does inject elements of our current cultural moment, it follows a sweeping historical narrative, and details how classical Christian education is more than a different savor of education—it’s an essential ingredient if we are to remain free. ✤

The Miseducation of America (documentary)—or go to FoxNation.com to watch.

The Battle for the American Mind (book)
Available for preorder on Amazon.com.