Princeton Grad Unhinged by a Five-year-old

… And what he did about it

Fresh from the halls of a premiere college prep school in Atlanta, a young Howe Whitman headed to Princeton.

From there, doors were opened to Wharton where he went on to get his master’s degree. He ended up back at Princeton and, as a Christian, became involved with campus ministry. His two kids were five and three. Life was comfortable and predictable. The path that began on Whitman’s first day of kindergarten decades ago had led exactly where it was supposed to.

Today, Howe Whitman sits at a desk in the shadow of Princeton University. His current occupation could hardly be more at odds with his alma mater. He talks about unconventional topics, like the history of ideas, the education of the whole person, and the pursuit of Truth. His office is modest, and shares space at a local Jewish Community Center. His meetings invariably involve children. What reversed his status quo trajectory? It happened in one day, when his five-year-old told him something about life.

“After talking with one of his pre-school buddies my son said, “My friend said we should HATE our enemies.” I said, “Well, that is an interesting conversation … were you talking about loving your enemies?” Somehow the Bible had come up and my son was confused. He finally summed it up, in his own five-year-old way, saying, “It was just strange that the Bible came up at school. Sometimes I get my church plans and my school plans confused.”

I thought, “Wow!” Already, at such a young age, these two paths don’t meet in his mind. He is articulating that a sort of dualism is the reality of his life. There is school—and there is church and spiritual. And it’s weird if they ever cross paths.

My primary responsibility is to raise my children in the nurture and admonition of the Lord, to help them to become disciples of Christ for their whole life, and to develop their gifts and use them for the Kingdom of God. If he thinks school (seven hours a day, 35 hours a week) has nothing to do with anything spiritual—that’s going down a path that is a little alarming.” 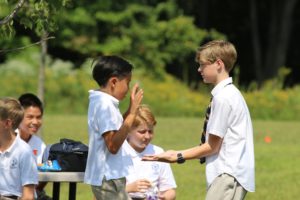 Howe began thinking more deeply about his own education. He remembered, as a Princeton public policy major, reading Thucydides’ Peloponnesian War. Up to that point, he had only read current articles on those issues. Reading Thucydides, he had an epiphany—people have been thinking about these issues for a long, long time. He could have graduated with a degree from Princeton in public policy without ever having read anything prior to 1950 about the way people for millennia have wrestled with the greatest issues and questions of human existence.

None of his other schools had done much better. He came to this conclusion: Progressive education values what is current and devalues what is past. It walks away from the richness of what makes education effective by gutting everything “old.”

Valuing only what is “progressive” creates another problem. It tends to separate education from philosophy, spiritual life, and faith. The hundreds of thousands of dollars his family had spent on the best private schools and universities seemed to have built nothing solid and lasting, because modern education is disconnected from what is truly important. It is incoherent. The five-year-old knew it.

What was Howe’s reaction to this revelation? He began to seek the answer to this question: Where could he find deep, rich academics integrated with intentional Christian discipleship? The search led him to classical Christian education (CCE). In CCE he found the model for what he believed education to be. He would eventually cofound The Wilberforce School in Princeton, NJ.

According to Howe, “You have to be a little bit crazy to think you can add anything to the educational environment of Princeton. It’s an education town and education is the town idol. There are well-regarded public schools; well-endowed, respected, independent private schools; expensive prep schools. And it’s a very post-Christian culture.”

But, with a sentiment to which many parents can relate, his kids made him do it. According to Howe, “Princeton used to do what we as classical Christian schools do now. That’s what’s so exciting to me about CCE. It is the recovery of an education that, due to philosophy and progressive views of education, has been abandoned.”

Parents often gasp when Howe tells them, “We are not a college prep school.” He goes on to explain:

Howe often mentions his experience with his son.

“We talk about integration of faith and learning, and the intentionality required to do that. Because during those school hours, formation is happening—not just intellectual, but spiritual and character—whether we want it to or not. Parents realize they want their child to have an integration of faith and learning, rather than coping with a dualism where they do spiritual on Sundays and academic at school. That is a recipe for disintegration.

Each year gets more exciting for Howe. Four years ago, Wilberforce started its high school, and Howe has enjoyed the richness of the upper school program. Howe’s feelings echo those of many parents involved in CCE:

“When I think about what our students are doing and what I did in high school—even at a pretty well-regarded school—I think, “So much of what I did in school was a waste of time.” Classical education is the education I wish I had. And it’s a privilege that my children do.