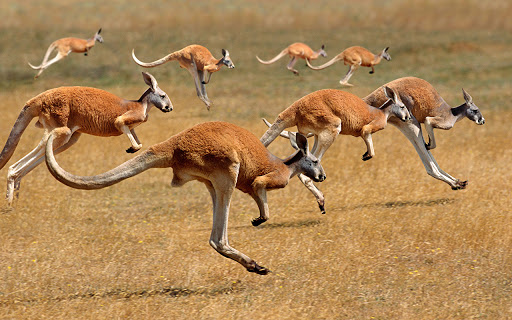 Everyone knows a kangaroo trips when he tries to run, and everyone knows the world is filled with contradictions. People say one thing and do another. Medicines designed to cure, instead carry side effects worse than the original ailment. Politicians elected to pass legislation protecting children, instead pass laws protecting a woman’s right to dismember children in the womb. Peace comes through war and liars search for the truth. And then there is the experiment of secular education, seeking to impart knowledge apart from the presupposition of the God of the Bible. The God of all creation, who reveals himself in the Bible, is a knowing God. As Ultimate Reality, this God acts, ordains, and reveals in accordance with ultimate truth. Thus, the enterprise of thinking is a gift of God. The creator-God, the knowing-God, has “made foolish the wisdom of the world” (1 Cor. 1:20). This means that education governed by the wisdom of the world is foolish. Education that is concerned with the ultimate truth of the Ultimate Reality must be governed by the dictum of thinking God’s thoughts after him. This is why Solomon says that, “the fear of the Lord is the beginning of knowledge” (Proverbs 1:7). Education that seeks knowledge apart from God is like a garden that seeks life apart from earth and water.

Not Four, but Three Horsemen of American Education

The triumvirate of American public education is Horace Mann, John Dewey, and Wilhelm Max Wundt. Mann and Dewey you know. A name to conjure with, Horace Mann buoyed the idea that school should be paid for, controlled by, and maintained by the government. As for Dewey, “the father of modern American education,” it is no exaggeration to say that he is the single most influential figure behind public education today. Dewey embraced subjectivism, valuing the vicissitudes of experience over Transcendent Truth. He taught that the central importance of the public school is to separate children from the prejudices of their parents, especially the sort of traditional prejudices that fail to see socialism as an ideology superior to the family. This is a key reason why the Soviets fawned over Dewey’s book, Democracy in Education, and invited him for a 1928 visit to the Soviet Union. Upon return, Dewey reciprocated the fawning with a glowing six-part series published in The New Republic, concentrating his praise on the Soviet education system.
Then there is Wundt. From the late nineteenth to the early twentieth century, Wundt labored at a German university where he created the first laboratory of psychological experimentation. His lasting contribution is the priority of “self-esteem” to intellectual performance, exported straight from his German laboratory to the United States by James Cattell. Wundt may be long dead, but his ideas live on in American education.
Wundt’s contributions combined with Ralph Waldo Emerson’s priority of self-absorption—which sounds too selfish, so he called it “self-actualization”— to shape the “outcomes-based education” of modern education, where students learn what students want to learn. Teacher trainers now offer class after class of instructional methods which all have one precept in common: avoid uncomfortable truths in favor of psychological stimuli. The permanent consequence is solipsism. The light of learning has been switched off.

After Wundt’s death, no one continued his research, except in the United States. The United States had a developing education system in place that joined up with Wundt’s ideas. Teachers once saw multiplication tables as something to be learned. Now they see it as a desirable student outcome. If the student fails to learn their multiplication tables, it is because the right stimuli aren’t used. If the student still fails to learn, it is because of low self-esteem. Outcomes-based education downplays grades in favor of emotional and social well-being. It isn’t that kids don’t learn, but they learn the wrong thing. A child’s sinful desires are considered values that need to be supported. Students learn to blindly follow their base desires and wants, and not just follow them, but justify, them, excuse them, and harvest them. Welcome to a word of ill-informed and happily thoughtless captives who love the wrong things and hate the beautiful things.

The Apostle Paul had a few things to say about God giving people over to their sinful desires. It’s all rather unpleasant. To the self-deceivers and Truth-suppressers, “God gave them up in the lusts of their hearts to impurity, to the dishonoring of their bodies among themselves, because they exchanged the truth about God for a lie and worshiped and served the creature rather than the Creator, who is blessed forever! Amen. For this reason, God gave them up to dishonorable passions” (Rom. 1:24-26a). To those who refused to love the truth, “God sends them a strong delusion, so that they may believe what is false, 12 in order that all may be condemned who did not believe the truth but had pleasure in unrighteousness” (2 Thessalonians 2:11f). Jeremiah said to the idolaters, “Your ways and your deeds have brought this upon you. This is your doom, and it is bitter; it has reached your very heart” (Jer. 4:18). Obadiah said to the haters of God’s people, “For the day of the Lord is near upon all the nations. As you have done, it shall be done to you; your deeds shall return on your own head” (Ob. 1:15).

The solution to sin-bondage is not to create an entire system that gives people over to their sinful desires. Sinners need liberation from their captivity. For children raised within covenant communities, the goal is not, as some well-intentioned educators may assume, the mere transfer of information—Carter bad President; Reagan good President. Rather full liberation is the transfer from darkness to light. The goal isn’t merely to know something or know how to do something. The goal is to cultivate the child of Light.

Think of it this way. Ten years after graduation, the eleventh grader will not remember the full scope of details of one literature discussion, or history lecture, or math lesson. Eleventh grade isn’t meant to be permanent. So then what of education? What of learning? Well, if education is formation, then learning is the process of forming. The student urgently needs to participate in the literature discussion, engage with the history lecture, and share in the math lesson. But why? If the details of the lesson won’t even be remembered ten years later, why engage? Why go to class? Why work hard to learn? The answer is that students need to be formed. The failure to be formed is to remain thoughtlessly captive, and the way to be formed is to engage in the moment.

The end goal of education is formation, not perfect retention. But formed into what? “Finally, brothers, whatever is true, whatever is honorable, whatever is just, whatever is pure, whatever is lovely, whatever is commendable, if there is any excellence, if there is anything worthy of praise, think about these things” (Phil. 4:8). Ephesians 4:23-24 says, “Be renewed in the spirit of your minds, 24 and . . . put on the new self, created after the likeness of God in true righteousness and holiness.” The Scriptures talk about Christians as new creatures in Christ. The mind of the new creature is the transformed mind that is devoted to thinking God’s thoughts after him. Even if decade’s later students retain only a smidgen of information from a particularly interesting science lesson, what they thought as sixteen-year-olds forms what they think ten (or fifty) years later.

More than thoughts, Christian formation is interested in desires and loves. By calling on Christians to “think,” God is calling Christians to develop a life-liturgy that trains the heart to love the one thing in the world that is unequivocally worthy of praise. God well knows that we are creatures of habit. By calling Christians to “think,” Paul is calling on the church to develop Spirit-empowered, heart-calibrating, habit-forming practices to transform their loves. So if the goal of the teacher is student-formation, the telos is a student who loves the Lord with all their heart, mind, soul, and strength, and loves their neighbor as themselves (Mt. 22:37-39).

Question number one in the Westminster Catechism says that the chief end of man is to glorify God and enjoy him forever. This makes the purpose of education clear, namely, to develop and nurture children into a life of glorifying God by enjoying him forever. In contrast to the education that dominates secular society today, the starting place for imparting knowledge is to be formed by a teacher who knows God. God-designed formation happens through an interpersonal process, which means the central feature of education is relationships, not technology.

It’s now chic to howl for more technology in the classroom. Why not, so the thinking goes, provide video recordings of lectures from the best teachers in the world? Then students can re-watch and pause. Why not have students spend their days reading Wikipedia about the subjects that interest them? After all, Wikipedia knows far more than any teacher ever could. Why not glut classrooms with all the latest technology in order to take the teaching burden off teachers?

Aside from the fact that live lectures inspire better learning, real-life classroom relationships are needed for formation. The quality of formation depends on the quality of interaction between teacher and student. If the goal is information transfer, then bring on the screen invasion. But the goal is something different entirely. It doesn’t matter how many gadgets the education machine puts in the classroom, without transformation there is only captivity, and without relationships, there is no formation.

Suspend disbelief for a moment and make-believe that out of nothing sprang an explosion, and after the explosion came the primordial soup. Then make-believe that living cells appeared and human beings are the end result of millions of years of unguided, purposeless, material mechanisms of random and pointless mutations. Forget that mutations tend to impair rather than build complexity. Ignore the abiding drive for purpose within all human beings—what Victor Frankl called “Man’s search for meaning”—and the design feature of complex organisms. Call it only apparent purpose. Call it the appearance of design. Tell yourself over and over again that life is meaningless, kind of like a Kangaroo telling himself over and over again he isn’t designed to hop, as he hops across the eucalyptus woodlands of northern Australia. In your fairy tale, don’t forget those woodlands are something that came from nothing and that humans have hollow souls equal to that of a cockroach.

Now, craft a theory of education in that make-believe world. Remember, life is meaningless. Morals are relative. Love is impossible (according to Sartre). Life is about chasing whatever is life-enhancing (according to Nietzsche). What might that theory of education be? Mann, Dewey, and Wundt have given us their answer. But through the Classical Christian education movement, Christian families have responded with an entirely different answer, an education experience that starts with the premise of the God of the Bible.

JASON CHERRY teaches history and New Testament at Providence Classical School in Huntsville, Alabama. He graduated from Reformed Theological Seminary with a Masters of Arts in Religion degree and is the author of the book “The Culture of Conversionism and the History of the Altar Call,” now available on Amazon.