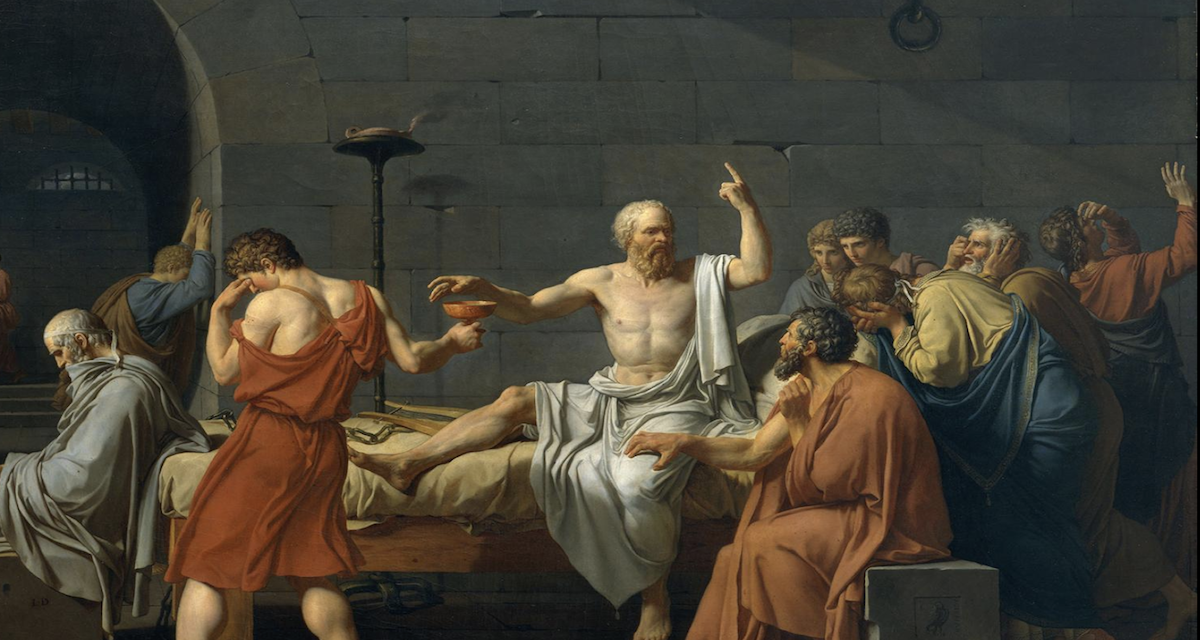 See more in The Stacks.
Please note that the views expressed here do not necessarily reflect the views or policies of the ACCS.

Socrates was a brave man. Yes, he had been soldier, but more importantly he was a man who wasn’t afraid of the answers to difficult questions. He was, rather, counter-Athenian-culture as he questioned the nature of man and his role in society. He used his philosophical skills to address the Athenian need for moral introspection, in contrast to his culture’s propensity to pursue personal and political gain.

Plato took Socrates’ philosophical mantle and perpetuated his legacy by writing down his ideas. What more could a Greek ask for than to have one’s kleos, one’s “glory,” live on? Not that Socrates sought it. It may be that those who don’t seek personal glory are more apt to experience it. Plato’s kleos  is that he articulated “the good” and challenged Athens to morally better itself. His “cave allegory” has memorialized his efforts to stimulate others to seek “the good.”

This intellectual lineage continued with Aristotle, tutor to Alexander the Great, Hellenizer of the world; to Cicero, Latinizer of Greek ideas; to Augustine, Chrisitanizer of all that was important. We rely on these stepping stones of history today. These giants did the heavy lifting for us. Often defining what something is relies on defining what it is not.

The quest for answers in order to improve, teach, and protect society may have been the desire of many Greek leaders. They sought to live within a framework of morality, whatever the impetus. Perhaps it was to please a god, to honor one’s family, or to perform the duty of an office.  Pericles of Athens is an example of duty-driven ethics, however imperfect. He served the Athenian city-state as an officer and statesman and remains a legend.

Throughout history, the mark of an effective leader has been the ability to persuade others toward some end. This is exemplified by Pericles’ morale-motivating speech of which his Funeral Oration is a part. Pericles’ desire for integrity influenced the morals of his day. His desire to save Athenian democracy at a critical juncture in its history is precisely what positioned him to exercise another quality that only the best of leaders possess, sophrosune. One interpretation and explanation of sophrosune is by Alasdair McIntyre. In his book, After Virtue, he translates it as “power with restraint.”

What would happen if our leaders today practiced sophrosune? “Me-ism” would not be the driving force it is. Selflessness would take precedence. The greatest historical example of this is Jesus. He demonstrated sophrosune again and again from the temptation in the desert to every miracle and act of self-control. Jesus epitomized power with restraint.

Our culture is experiencing a famine, the result of progressive education.  To be classically educated is to feast on the abundance of truths that feed the mind, heart, and soul. To offer students a classical education is to offer them power.To possess solid knowledge in subject matter, and skills in communicating that knowledge, means others will rely upon classically trained students. To be relied upon is to lead to one extent or another. But knowledge alone will not make a Christian leader-wisdom will. Sophia, or “wisdom,” is what Christian educators should train our students to pursue as they acquire knowledge. Being a lover of wisdom is knowing the absolute standard of God’s law and having the courage to act on it. Wise leadership necessitates sophrosune.

I propose that “me-ism” rules because philosophy-turned-science has declared God is dead. When everything is questioned, absolutes are intolerable. Classical Christian classrooms foster morality, religion, and values and reconciles them with facts. This allows students the freedom to make God-based choices as part of their repertoire of knowledge. As the moral and educational vacuum left behind by society grows, our students will be equipped to lead. Ought we not instruct them in sophrosune? Students need a clear understanding of the temptations and stresses positions of power contain as they begin to lead.

Anyone in a position of authority has the power of influence, albeit, the greater portion of power is influence rather than authority. No matter how much power a person possesses there are circumstances that exist beyond his or her control. Pericles’ authority could not stave off the plague, but his influence-how he handled the epidemic-was essential. As Christians we possess power. We ought also keep in mind the personal aspect of sophrosune:  endeavoring to exercise it while yielded to the Holy Spirit.

Well-defined sources of moral behavior are found in the Bible passages regarding the fruits of the Holy Spirit (Gal. 5:23), I Corinthian 13:4-8, as well as Aristotle’s Golden Mean. Augustine reinforced the pursuit of Biblical morality in his Confessions, stating “We must practice sophrosune, particularly when we find ourselves in circumstances beyond our control.”

Perhaps finances have us in a vice grip, we’ve been betrayed, or we’ve suffered seemingly beyond endurance. We have power in our apparent helplessness.  We can form new habits, practice forgiveness, or refuse to give into the temptation to blame God for our problems. Job practiced sophrosune. The crucified Jesus practiced sophrosune. We ought to practice sophrosune. We possess the power to destroy; we ought to use our power to edify. When we suffer, when we experience what the ancients called “reversals of fortune,” we ought to reach for the finger of God. He will breathe new life into our circumstances. Our personal lives influence our professional lives.

Operating from this understanding of sophrosune, let us usher morality from its relegated corner onto the stage, addressing the moral questions found in every subject. Our duty as Christians, and  educators, is to benefit our culture by our practice of power with restraint, to be the leaders we are hoping our students will become. A life well lived, a life that practices sophrosune in order to transcend our circumstances, has the power to enrich our teaching and transform our world.