At a certain pivotal moment in the last third of Rian Johnson’s foray into the Star Wars saga, Luke, desirous of ending the Jedi order once and for all, sets out to destroy the sacred texts of the old Jedi religion.

ALERT: This article contains spoilers. Skip to the last two paragraphs to avoid them.

As he approaches the cave to torch them, he is confronted by his old master Yoda, who completes the task for him by calling lightning down from heaven and swallowing the cave up whole. Yoda responds to Luke’s confusion and astonishment with two very telling responses: “Page turners they are not” and “The Library contains nothing that the girl Rey does not already possess.”

These two statements sum up much of what is wrong with the newest Star Wars entry.

Star Wars: The Last Jedi is the first of the Star Wars films that could be labeled as iconoclastic. JJ Abrams’ take on the Star Wars mythology tried, to a fault, to echo the tone and tenor of the original trilogy. This new iteration has chosen, almost wholesale, to destroy the world that came before.

To recognize how this happened, one must understand what made the first Star Wars so revolutionary. The original (subsequently re-titled Star Wars: A New Hope) appeared in an era when great filmmakers were embracing the cynicism of the age. The Godfather, Taxi Driver, Chinatown, and All the President’s Men are examples of the dominant aesthetic that rejected the notion of authority, the idea of an established morality, and the longstanding notions of hero and villain. People found the old Hollywood of yesteryear too hopeful, sentimental, and unrealistic for their post-Vietnam, post-Richard-Nixon world. They wanted their entertainment to fit their experience.

It was into this world and this common sensibility that Star Wars was born. Unlike other popular films of the day, Lucas presented a clear vision of good and evil, set against the optimistic backdrop of a mythology that was as distinctly American as apple pie. He made a movie that was aptly titled A New Hope, for it did indeed instill people with whimsy, wonder, and a desire to be good. It made us believe in heroes again.

The original trilogy (and even the prequels) is completely in earnest. These films are not self-aware in the slightest and they do not make light of the themes that matter the most to them. Religion, tradition, wisdom, good, and evil—these were things to be taken very seriously in the Star Wars of yesterday.

Yoda, however, in The Last Jedi, destroys the notion of a received tradition and of religion, and lets us all know that power does not rest in a tradition that is passed on from master to student, but lies instead in the individual. Rey has all the power she needs at her own fingertips and she does not need anyone to bring that out. She doesn’t need books, she doesn’t need tradition, and she doesn’t need Luke. She doesn’t even need any training—she clearly receives none throughout either of the films in which she appears. She has the power within herself and herself alone. This is why Star Wars: The Last Jedi is, philosophically, a failure. It has finally jumped ship. It is now self-aware.

Consider Poe’s “mama” joke directed at Hux in the beginning of the film, or Luke’s flicking the dust from his shoulder during the final sequence. Consider the tantrum that Kylo Ren throws after being reproved by Snoke. Consider Luke himself who, in a moment of weakness, lights his lightsaber to kill his sleeping nephew, beginning Kylo Ren’s fall into darkness. It no longer recognizes the very real, menacing evil that was present in the original films. What is more, there is no longer anything or anyone truly good.

This is a film that has decided, not to subvert the expectations of culture, but rather to jump on board. There is no true good and no true evil. There is no hope for actual resolution to take place in the world around us, but we are fated to commit the failures of our fathers ad infinitum. There is no longer any tradition, religion, or truth outside of ourselves—there is nothing to lead us to hope. My only hope is in myself alone, and the only thing I can do in the face of despair is laugh. This is the message and lesson of the world in which we live, and it is the new message of Star Wars.

This just scratches the surface. I haven’t even begun to discuss the way Johnson doubles down on Lucas’ already established monistic view of the universe that teaches a Taoist ethic. This indeed has always been present in the films, but is far more explicitly stated, and in far darker tones, in this one. Nor have I mentioned the heavy-handed feminism portrayed throughout the film, which goes to great lengths to establish the authority and superiority of women over men, going so far as making each example of male decision-making a tragic failure, especially when contrasted with the particular wisdom and heroism of their feminine counterparts.

Star Wars is a mashup of modern progressive talking points tacked onto the skeleton of Lucas’ established mythology. It subverts the good that existed in Lucas’ work, and accentuates the bad. It is not your mom and dad’s Star Wars.

TOM VELASCO studied philosophy and history in college with a minor in Latin, and has since spent the majority of his years teaching everything from logic to humanities to Greek and Latin at The Ambrose School, Meridian, ID. His natural affinity for pop art and culture, especially cinema, is evidenced by the approximately 370 films he has viewed each year over the past five years. An active member of a social networking community of amateur and professional film critics, he has also written many film reviews and critiques. 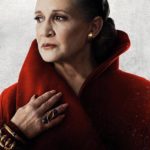