World-Changing Education on a Global Scale 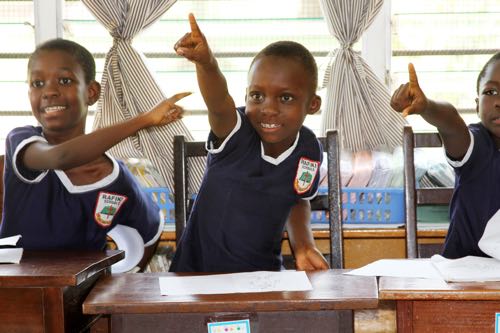 desks in the bright classroom, and

the second grade students read each

one carefully, passing them

around to their friends.

They call out questions about strange-sounding names like “Wynn” and “Caden,” asking if they are boys or girls. They ask if the boy who wrote that he liked “football” meant the American kind of football, or the African kind (soccer). They ask about the favorite foods listed on the cards—some are foods they have only seen in books.

The cards traveled halfway around the world from a second grade class at a classical Christian school in Texas, to this second grade class at a classical Christian school in Tanzania, East Africa. The Tanzanian students quickly get to work on their own construction-paper cards, laughing and talking as they write down their own favorite foods and games, sending back answers to their new pen pals. When classical Christian education found its rebirth in the U.S. more than 25 years ago, no one would have imagined that this model of education could create a bridge between continents. But from recitations and Scripture memory, to classical literature and critical thinking skills, students at Rafiki schools in 10 countries in Africa share common ground in education with their counterparts in the United States.

The Rafiki Foundation was formed in 1985 with a mission to help Africans know God through Bible study and raise their standard of living in various ways. Over the decades the mission expanded to meet the needs of widows and orphans in 10 African nations, providing loving group homes for children, and marketing of crafts for widows, while continuing to provide Bible study materials for all participants. Originally Rafiki planned to house and care for the children in its Rafiki Villages, and send them to school in their local communities, says Karen Elliott, executive director of the Rafiki Foundation. But it became clear that if they really wanted to improve these children’s lives and give them a brighter future, Rafiki would need to provide an education for them as well.

he only pedagogy to marry with Christian education is classical pedagogy because it pursues truth.”

“You can’t really marry a progressive education with a Christian education.” Progressive education is the antithesis of what African schools need, Elliott says, because it trains students to be cogs in a wheel by teaching them to check boxes and regurgitate information without weighing and truly examining that information. A liberal arts education, on the other hand, “is the education of free men.” Classical education rooted in biblical truth teaches students to use critical thinking skills, to ask questions, to probe deeply to seek out truth, wisdom and virtue.

Unfortunately, the packaged classical Christian curriculum available for purchase in the U.S. is both cost prohibitive for the ministry and culturally inappropriate for Rafiki schools. So Rafiki hired classical educators to write curriculum for a specifically African context: mangoes and passion fruit instead of apples and blueberries; Dar es Salaam instead of Dallas; Chinua Achebe alongside Charles Dickens.

To prepare Rafiki graduates to succeed in a global marketplace, the Rafiki curriculum maintains much of the foundations of western civilization taught in North American classical Christian schools, but African history and culture are emphasized as well. True to classical education, Rafiki schools prioritize fine arts education—something generally unheard of in traditional African schools. As a result, they are always looking for music and art teachers from established classical schools to volunteer at Rafiki schools, not only to teach students, but to train national teachers as well.

Rafiki schools serve the orphans who live in the Rafiki Villages, as well as day students from the surrounding community on a space-available basis. The school fees for day students are very low compared to other private schools, and their reputation for providing a loving Christian environment and outstanding academics has created high demand. In Rwanda recently, a woman who was 7-months pregnant asked if she could register her unborn child to make sure she had a place at the school. At the school in Tanzania, more than 100 mothers, fathers, aunts, uncles and children waited for hours to interview for only 18 available spots. One 9-year-old girl went home in tears when she was told there was no room in her grade, then she decided to fast and pray, believing in faith that God would open a spot for her. (He did.)

When the handmade cards from Tanzania make their way back to Texas, a similar scene will unfold in a bright,second-grade classroom with construction-paper cards spread across desks, passing from one student to the next. Children will ask questions about strange-sounding names like “Kindness” and “Innocence,” and what this food called “ugali” is like. In a few years, they will all—Tanzanian and American alike—be reading “The Bronze Bow” and reciting long passages from the book of Romans. They will discuss Plato, democracy, and the ethics of slavery. And they will all, Lord willing, become lifelong learners who use the tools of their education to glorify God with their lives.

Because of the rigor of the classical Christian education Rafiki is offering, finding qualified national teachers can be a challenge. University-trained educators with excellent English can command top salaries in their countries, and often teach in private international schools. Rafiki can’t compete with those salaries, so the organization took a more sustainable, longer-range approach: they created their own classical teacher training program for high school graduates in each of the 10 countries where Rafiki operates. The program is called RICE (Rafiki Institute of Classical Education).It will be another 10 years before Rafiki can fully realize the fruits of this teacher-training program, but their vision is expansive. Rafiki wants to train classical Christian teachers who can not only staff Rafiki’s schools, but who can start their own schools all over the continent using Rafiki’s classical Christian curriculum free of charge.

Rafiki regularly welcomes teachers from the United States and elsewhere to work in Rafiki schools, either in the classroom with the students, or training future teachers in the RICE program. Teachers can spend a summer working with Rafiki, or join them for a two-year (or longer) stint in a full-time teaching position. Interested teachers should contact Karen Elliott directly at karene@rafikifoundation.org.

AMY BURGESS is the Admission and Marketing Director for Covenant Classical School in Fort Worth, Texas. She received her B.A. in Communication from Biola University. Amy and her husband, Josh, have two children who attend Covenant.

[…] permeates homeschooling circles and has made its mark on many private schools in the U.S. and even around the world.  Such a program allows students to achieve at their own pace and move into college or a vocation […]