A Dose of Truth 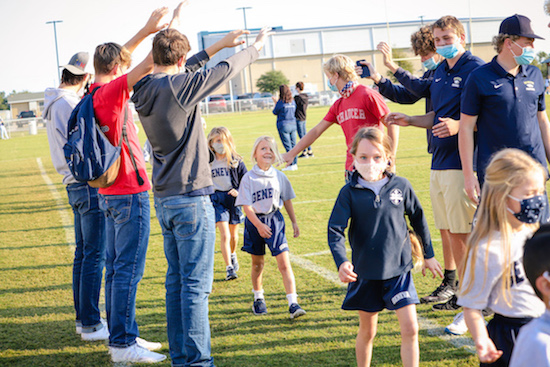 A MAN WHO HAS LIVED IN MANY PLACES IS NOT LIKELY TO BE DECEIVED BY THE LOCAL ERRORS OF HIS NATIVE VILLAGE: THE SCHOLAR HAS LIVED IN MANY TIMES AND IS THEREFORE IN SOME DEGREE IMMUNE FROM THE GREAT CATARACT OF NONSENSE THAT POURS FROM THE PRESS AND THE MICROPHONE OF HIS OWN AGE. —C.S. LEWIS

There is a good reason this C.S. Lewis quote is becoming more popular. A while back, The Classical Difference published an article titled “Transformed Through Tradition.” A reader wrote in, commenting that the title “means literally nothing.” America’s Progressive Era of the early 1900s marked a distinct shift away from tradition and custom. This was not always so. Until relatively recently, people valued their heritage. Tradition was considered to have authority. The tried and true was valued over the new and untested. Then, during the Enlightenment in roughly the 17th and 18th centuries, the decline began.

Today, what C. S. Lewis called “chronological snobbery” has become habitual. Modern progressive ideology tells us the newer thing is the best thing. We look down on the past, and Christians are as guilty of this as anyone else. This attitude is obvious in many schools, where the study of history is almost non-existent, relegated to textbooks and multiple choice test questions. The progressive worldview has caused many ideas essential to freedom to fall out of fashion.

How do we protect our children from the nonsense of our age?

A DOSE OF REALITY

Thou hast made us for Thyself, O Lord, and our hearts are restless until they rest in Thee. — Augustine

Consider the idea that ultimate Truth exists. There is no “your truth” or “my truth.” There’s just Truth. This is one of the most important ideas that has fallen into obscurity.

The Greeks had a word to encapsulate everything in the world, physical and metaphysical, into one—cosmos. Regardless of popular opinion, we as human beings have a natural tendency to try to conform our minds to reality—to conform our intellects (the True), our wills (the Good), and our imaginations (the Beautiful) to the cosmos.

This is what our children need to thrive, and what education should be for: assisting students to conform their souls with reality.

Aristotle was the first person to describe a “cosmic order,” and he did so in a way that still commands our attention and respect today. Even though he did not know the God who ordered the world, he had, by virtue of a God-given rational soul, figured out the order itself. There is a reason Aristotle came to be known as “the master of those who know.”

When several of Aristotle’s works were rediscovered in the West around the end of the first millennium, medieval scholars like Thomas Aquinas reconciled them with Christianity. This effort helped to produce Aquinas’ great summas: Summa Theologica and Summa Contra Gentiles—words you will see in many classical Christian high school curricula. These works joined all knowledge and Scripture into a coherent picture of reality. The medievals rationalized everything, including religion, which is why there are more logical syllogisms per square inch in the average medieval theological treatise than in any book of science.

The decline of the medieval world picture and its gradual replacement with the modern and nihilistic philosophies of our day has led to devastating consequences.

In his book Technopoly, Neil Postman contrasts the medieval view of reality with the modern view using a deck of cards:

The belief system of the Middle Ages was rather like my brand-new deck of cards. There existed an ordered, comprehensible world-view, beginning with the idea that all knowledge and goodness come from God. What the priests had to say about the world was derived from the logic of their theology…. The medieval world was, to be sure, mysterious and filled with wonder, but it was not without a sense of order. Ordinary men and women might not clearly grasp how the harsh realities of their lives fit into the grand and benevolent design, but they had no doubt that there was such a design, and their priests were well able, by deduction from a handful of principles, to make it, if not rational, at least coherent.

The situation we are presently in is much different … It is rather like the shuffled deck of cards … There is no consistent, integrated conception of the world which serves as the foundation on which our edifice of belief rests. And therefore, in a sense, we are more naive than those of the Middle Ages, and more frightened, for we can be made to believe almost anything.

A system of morality which is based on relative emotional values is a mere illusion, a thoroughly vulgar conception which has nothing sound in it and nothing true. —Socrates

When Charles Darwin wrote in his notebooks, “Never say ‘higher’ or ‘lower’,” he wanted to eliminate the idea that anything in nature is higher or lower, in any non-scientific sense—better or worse, we might say. Plants were not necessarily higher on any metaphysical scale than rocks, nor were animals higher than plants in this way. And, of course, this belief included human beings. Human beings were not “higher animals,” just more “biologically complex.”

Modern education consists largely of an unholy alliance between modernist utilitarianism—in the form of vocational training—and postmodern progressivism. Educational leaders increasingly see schools as job training centers or as places to become properly indoctrinated in the ideology of cultural revolution.

The majority of citizens today cannot pass basic history tests, including our test for American citizenship. They don’t know what the Great Books are. They cannot explain the pros and cons of a democracy versus a republic, and a movement is afoot to remove the Electoral College.

With our schools as fractured as our worldview, classical Christian education offers an important antidote to the nonsense.

Education is not a subject, and it does not deal in subjects. It is instead the transfer of a way of life. —G. K. Chesterton

Classical education is the curriculum we see in embryo when we read the works of figures such as Augustine. They took the learning of those who had gone before and, placing it at the service of Christian belief, began transforming it into a system of Christian education.

This system of education would pass down through centuries and would keep, as its foundation, the rational order discovered by ancient thinkers and improved, developed, and perfected by later Christian thinkers.

It would become the paradigm of learning in the New World through the work of the Puritans, who established institutions such as Harvard and Princeton—thoroughly classical institutions. It would constitute the learning of the Founding Fathers, and the uncontested model of education until the turn of the twentieth century.

Classical Christian schools today are bringing back to light the knowledge of the ages—carried to us through the Greeks, the medievals, and the founding fathers. A true education is a Christian education, because it acknowledges that God has made all things, that reality is objective, and that we are created image-bearers with the capacity to understand and the responsibility to conform to our Creator’s will. Only by understanding our nature and our place does education succeed.

It was at the beginning of the late twentieth century—about one century after its purge began—that the classical Christian model of education began making something of a comeback in America. It is only fitting that its defense be taken up by the entity that was responsible for forming and preserving it in the first place: the Christian Church.

MARTIN COTHRAN is a writer and editor, the author of Memoria Press’ Traditional Logic, Material Logic and Classical Rhetoric programs, and an instructor of Latin, Logic, Rhetoric, and Classical Studies at Highlands Latin School. He holds a B.A. in philosophy and economics from the University of California at Santa Barbara and an M.A. in Christian Apologetics from the Simon Greenleaf School (now a part of Trinity University).