A New Documentary: The Miseducation of America 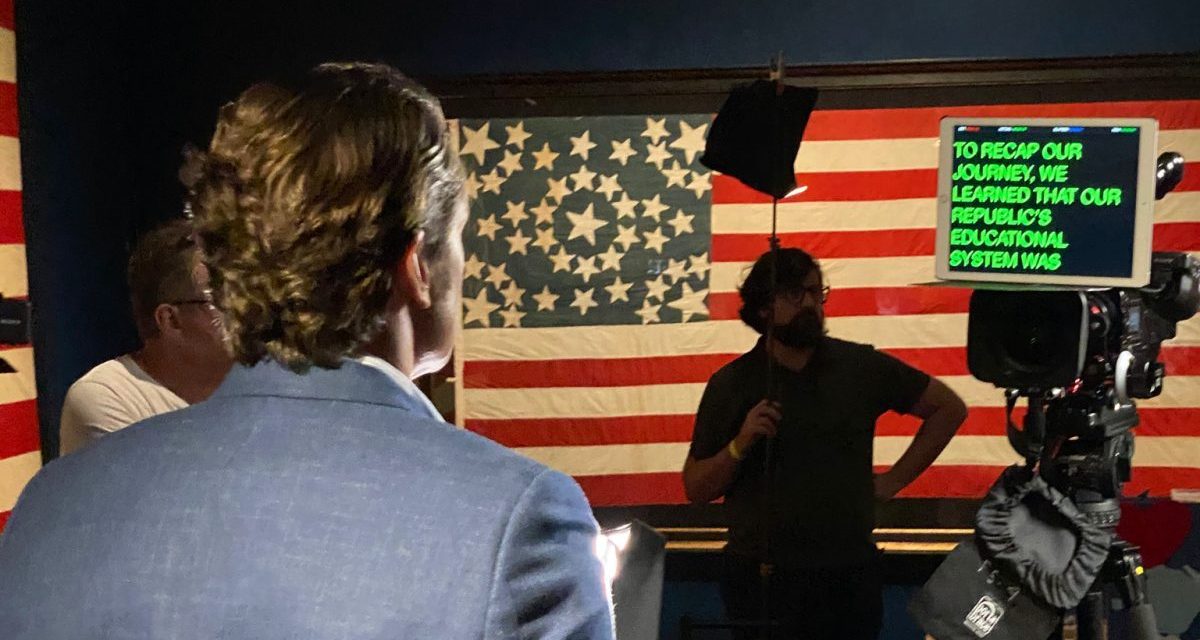 In this article: The Story of Education | A Two-year Project | Inside the Documentary | Out-takes and Fun Facts | Paideia

Battle for the American Mind, by Pete Hegseth and David Goodwin.
The #1 New York Times Bestseller

• “How Classical Education Can Rescue America From Progressive Disaster,” By Louis Markos.

New: Season 2 of Miseducation of America: Battle for the American Mind.

Look for its release in January.

The Miseducation of America Documentary

Click here to learn the backstory, read about each episode, and find out how to watch.

With David Goodwin and Guests on

Events in the news, on the web, or on social media seem to go down a little smoother with a glass of ancient wisdom.

The Story of Education

In 1907, a progressive experiment called the “Gary Plan” was underway in Gary, Indiana, that would forever change education and America. Gary was a newly minted steel town that needed a school. The Progressives took the opportunity to build a new kind of “model,” or experimental, school under the leadership of William Wirt, who had been a student of John Dewey at the University of Chicago. John Dewey, you may recall, is the father of modern progressive education. Gary’s prototype school contributed to what would become American education as we know it today. But it did something else—it started a debate.

Fast forward to 1914. The success of the Gary Plan pushed it to New York where it would be further developed. Upon its arrival, a debate broke out between progressive factions that revealed their true intent with this new form of education: to remove Christianity entirely from America’s schools. In New York, the Progressives had worked very hard to eliminate Christianity from the schools. The Gary Plan separated religion into a separate “pull-out period” to be managed outside of school. One group of Progressives was concerned that even this was too much, and that “creed consciousness…[that had been banished] from our American school, will be brought back in perilous form.” The other side countered, “As long as the public school is in any sort of competition with the church school, religion will not be entirely divorced from the schools.” Thus, Gary’s pull-out was a compromise that would foretell the elimination of America’s Christian identity. But why? Why did the Progressives, many of whom were among the clergy, want to remove Christianity from the schools so badly?

When I first read this debate in the pages of the progressive journal The New Republic from 1915, the question “why” led me on a quest to better understand what the Progressives had done. I found the answer. And, it was bigger than I thought. As it turns out, they removed Christianity because it perpetuated the Western Christian Paideia, which stood in the way of the progressive agenda. By removing this, they opened the door for a new path for America and for the American church. 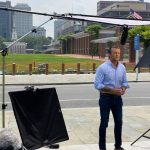 Almost two years ago, FOX reached out to the ACCS to contribute to a documentary on education. Our story helped form the narrative of the series. As you might imagine, the tone is consistent with many investigative pieces—with an “exposé” feel to it. Guests like Newt Gingrich and Michael Knowles, as well as the host, Pete Hegseth, are known for their conservative bent. In my opinion, the content is solid. In truth, at the time of this writing I haven’t seen the final episode (or any of the final versions), but the first four seem to bring the story to life in a way that is consistent with my interview with FOX. The scholarship on which the documentary is based is from Lawrence Cremin, a Columbia professor who won a Pulitzer Prize for the work that inspired the story.

Over the past year, education has taken center stage in the rolling cultural revolution. We saw this particularly after the Virginia election of 2021. Education has been on the main stage for the Left for over 100 years, and it shows in the culture around us. Due to the increased interest, this documentary is getting more attention than expected. On January 20th, FOX’s special live televised summit includes a number of educational guests on the topic. Lord willing, I can be there to represent classical Christian education (CCE).

Our interest at the ACCS is to invite everyone to join us at the table of a movement that thousands of parents have come to love and support. We are thankful that FOX was willing to tell the story and broaden our audience. 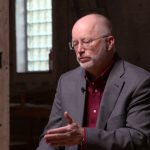 We hope more journalists will take up the call to promote classical Christian education. Should PBS offer the same deal, we will certainly take them up on it! I recently did an interview with the New York Times, and I’ve done feature pieces in other media outlets of various stripes. Our goal is to reach every evangelical Christian with the story of CCE. 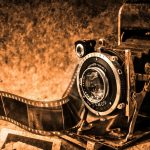 The Miseducation of America centers on something called the Western Christian Paideia (WCP). Even for parents whose children attend classical Christian schools, paideia is still a mystifying term. Much of its mystery comes because we take it for granted.

Most of us do not know how to make concrete, nor could we refine our own gasoline. We blissfully take them for granted as we go through our day because we know specialists have the formula. What if the formula for “civilization” has been taken for granted for so long that somehow it was lost? The Miseducation of America highlights the value of classical Christian education and tells the story of its deliberate removal by Progressives.

The progressive narrative tells us that our civilization today is the result of human progress over time, and now that science rules the day, they can improve civilization even further if given enough power and control.

This was not always the story we believed. The Western Christian Paideia (WCP) was cultivated in children across all of Christendom (the West) between about c. 100 AD and c. 1915 AD. This Christian narrative teaches something else. Our present culture and civilization will remain great only insofar as it aligns with Truth. Because Truth is fixed and unchanging, we should guard our society from influences that conflict with it, and we should strive to pursue Truth.

This give and take had refined Western culture to its zenith in the 18th and 19th centuries. The Progressives at the turn of the 20th century knew what they were up against. As long as the Western Christian Paideia (WCP) defined our culture and civilization, the progressive agenda would be limited.

So, the Progressives set out to re- place the WCP. By the 1950s, the schools had effectively embedded progressive ideals where the WCP once held sway. Progressive philosophies, such as Critical Theory, Marxism, and the influence of the Frankfurt School, dominate education. Today, our schools are far from the engine of freedom that classical Christian education once was. ✤ 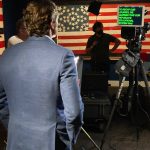 We originally planned to shoot scenes in Gary, Indiana, because the progressive model school that started it all is there, now in ruins. But, the location was so crime-ridden we could not find adequate security to enter the area.

The main interview between David Goodwin and Pete Hegseth was filmed on a set in New York during the height of COVID. You may notice the distance between them is, well, a bit odd looking.

We supplied FOX with a number of scholars to interview from the ACCS world, and they chose to interview Louis Markos. Impressively, a number of the other well-known guests also knew the story of classical Christian education well.

Victor Davis Hanson is interviewed on his family farm, in his orchard.

Look for the “peace flag” version of the American flag, created during the 60s, behind Hegseth during episode four.

Most of the narrative scenes were filmed in various locations around Philadelphia. The heat was stifling.

At its core, paideia motivates our decisions and behavior, through our affections. Because it influences each person in a culture, paideia forms a culture. How do we think? How do we vote? Do we marry? Do we have large families? Small families? Do we do productive things? Start a revolution? A million actions lie on the surface. Layers of influence and supposition lie under each decision. Paideia lies at the deepest level. It is the blueprint of thought, affections, and narrative through which every one of us views every thing. It is the building block of culture. It determines the future of a people.

Paideia is transferred through education, in a broad sense. Formal education plays a part, but so does our family life and the society around us. Paideia is hard to see because it’s so deeply set in us. It’s molded in childhood, and most malleable through college age. Paideia is hard to define because it, in many ways, defines who we are. This “bootstrapping” makes paideia difficult to fully appreciate.

We live in a world shaped by paideia, and yet we take it for granted. In fact, most people have never heard the word. And yet this word was foundational to Greek thought, and was more commonly used in America up until the 1900s. Because there is no English equivalent, the popular verse “… bring them up in the paideia and instruction of the Lord” (Ephesians 6:4) has several different translations, none of which are adequate. The stakes are high. Paideia is the primary ingredient in forming culture and thus civilization. And we’ve recently seen what it looks like when civilization begins to break down.

“Civilization is not a standard of living. It is not a way of life. Civilization is the deliberate pursuit of a common ideal. Education is the deliberate attempt to form human character in terms of an ideal. The chaos in education with which we are familiar is an infallible sign of the disintegration of civilization; for it shows that ideals are no longer commonly held, clearly understood, or deliberately pursued.”—Robert Maynard Hutchins, University of Chicago, mid-20th century

Verses that use the word paideia

“Fathers, do not exasperate your children; instead, bring them up in the training (paideia) and instruction of the Lord” (Ephesians 6:4).

“All Scripture is God-breathed and is useful for teaching, rebuking, correcting and training (paideia) in righteousness…” (2 Timothy 3:16).

“No discipline (paideia) seems pleasant at the time, but painful. Later on, however, it produces a harvest of righteousness and peace for those who have been trained by it” (Hebrews 12:11).

I can NOT find the ORIGINAL series anywhere. Does anyone know how to find it, if it still exists.

You can find it on FOX Nation. https://nation.foxnews.com/the-miseducation-of-america/

This was wonderful to watch. Explains the source of my fears for our children in school.