And Can It Be? New Hymns! 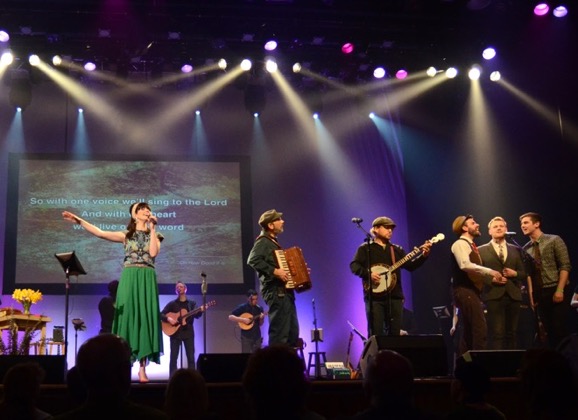 The Tour at the ACCS Conference | The Interview | Facing a Task Unfinished | www.GettyMusic.com

penned “Be Thou My Vision” in the sixth century.

emerge in his footsteps with songs like “In Christ Alone.”

It is estimated that no less than 40 million Christians sing their songs in church each year. Their 2015 annual tour, An Irish Christmas, aired on PBS, and they recently appeared on CBS Sunday Morning. What is the secret to their success? It seems to share some of the same qualities that are behind the rapid growth of classical Christian education (CCE). Art and music are more than enrichment classes at school, they are integral to worship. They lift us up to higher things in a world that wants to keep our eyes firmly pointed toward the ground.

Keith Getty graciously took a break from the Proclaim ‘16 conference in Nashville to visit with The Classical Difference about their music.

Watch this CBS report: “If you think hymn writing is a lost art, you’ve never met the Getty’s.”

Classical Christian education seeks the True, the Good, and the Beautiful. Do these ideas resonate with your creative process?

Beautiful way to put it. … That phrase encompasses all that we try to do. Putting music and words together, and presenting theological truth in a unique way, but living, speaking to the lifeblood. Giving hope, consolation, joy, and peace to the brokenhearted. Music has to help and enrich that. And (he says with a smile) Belfast, where I’m from, is the center of Truth, Goodness, and Beauty.

What inspires your work as you create new hymns in today’s world?

1) TEACHING: God’s people learn their faith in significant part, intellectually, emotionally, and artistically, through what they sing. … So, we wanted to write hymns that really taught the full canon of the God of Scripture. We live in a generation where there are more Christians in the world than at any point in human history, and yet the average person who calls himself evangelical knows less about the Scriptures than the average person who went to normal government school in 1950 in the West.

2) CONGREGATIONAL SINGING: All through history, God’s people have been singing together. Congregational singing is a holy act and the Bible talks about the joy of being together, and that every tribe and tongue will sing together. So we wanted to write music that was all about congregational singing. We write melodies that borrow their structure more from classic music or traditional folk music that can be sung apace, with an organ, with a Chinese instrument, or in a rock band. Songs where the medium doesn’t matter. That’s the centerpiece.

3) EXCELLENCE: The third thing that emanates from the first two is … that a biblical view of artistry means to take God seriously and to take creativity seriously. We want to write songs that lead to true theology, good music, and beautiful poetry.

There is no doubt music stirs the soul. Why do we leave church singing the last hymn, no matter how good the sermon was?

We are fearfully and wonderfully made in the image of God, and God Himself is a creative God, so we love beauty. We are more than just flesh and bone. Hymns have that ability to capture and fire imagination and heart and intellect and perfectly weld them together. Think of the words and music when you sing “…Exchange it someday for a crown…”. The fact of the matter is you will rediscover that line many times in your life. It will come out of left field and will offer consolation and excitement.

The title of our newest album, “Facing a Task Unfinished,” was inspired by Frank Hotenoff who was Bishop of China in the 1930s. It’s the power of hymns to galvanize in the most desperate of circumstances.

Why are hymns still with us in this modern age?

C.S. Lewis said, “All that is not eternal is eternally out-of-date” (The Four Loves). Great art is long term. We want to write songs that carry people through life—through the years of doubt, through devotional life, through teaching their own children, through congregational prayers, through personal prayer, through times of suffering, through growing old, and on their deathbed.

CCE believes in developing aesthetic for higher things, things that might be difficult to appreciate or understand at first. Do you think this is important?

Absolutely. I, as a father, and as someone who teaches indirectly by being a hymn writer, have a responsibility to want people to extend their minds. Lewis, Tolkien, Rowling … none of them are trying to explain to kids. They are trying to put things beyond their imagination, to extend them. Trying to oversimplify things for kids is a huge danger. The God of the universe never pretends to reveal everything to us anyway. We have to learn everything in the context of Deuteronomy 29:29, “The secret things belong unto the Lord our God but those things which are revealed belong unto us and to our children forever.” … Don’t teach the “celestial Santa Claus” even from the beginning, but remember that not on Earth will we ever get the whole picture.

This has direct application to what we sing in church. What would you like to encourage people to bring to songs in the church?

TEACHING: If you pick up the book Knowing God by J.I. Packer and go down [the index page] with a marker, how many of those attributes are mentioned in most modern worship songs? So are the songs true, authentic? Picking up 10-20 percent of the attributes of God palatable for the modern upwardly mobile American and ignoring the rest … is that intellectual integrity?

The aseitic [relating to the uncaused cause] qualities of God don’t get your hands in the air. “Immortal, invisible, God only wise … ”—where do I put my hands up and start feeling the way I felt when I was opening my Christmas presents? Nowhere. To understand your place in the universe, you have to understand that in the beginning, God. We believe God’s people singing is a holy act, so we help them sing. … It’s the responsibility of the leaders to make people understand why they’re singing, not driving toward an emotional experience.

CONGREGATIONAL SINGING: Pastors stopped teaching why we sing. The holy act of congregational singing is our infinitesimally small taste of heaven. We are commanded to worship in song on earth … and it’s a privilege. If you pan across many churches, most people aren’t really singing. They’re either observing or in an emotional trance. It’s like spoiling a child from the start, telling them they’re the center of the universe.

EXCELLENCE: Does the style of music matter? Do I think there is anything evil about having a rock band playing rich, deep songs? No. If the rock band is helping people sing, it’s good. If the rock band turns 70 percent of them off, that’s not good. If the rock band means that they don’t care about singing anymore and want to listen, then tell [the band] to take a vacation. If we start idolizing young people and not old people [by our music choices] … then that’s a bad thing.

You just have to think what’s all this about? and be wise.

Kids need to learn the value of perseverance and hard work. What advice would you give creative students or anyone who aspires to create?

Ninety-five percent of what we create never goes anywhere. It’s not sad, it’s just life. Of the songs I write, 60 would be in hymn books, and that might sound like a lot, but over 15 years of writing that’s four or five songs per year. Over 150 days of writing. That’s a lot of days of failure.

Any good lyric is a beautiful poem, but not any good poem is a beautiful lyric. On one song, we wrote 17 verses over 15 months, and used four. While I encourage creativity and songwriting at every level of life, I think the songs we use in our churches on Sunday morning have to be songs of high quality. I’ve seen churches use songs written by their youth instead of by Charles Wesley. This is not only exchanging good for bad, but giving people far too high an opinion of their place in the universe. It’s making people look to young people as leaders rather than mature people. They are nearly always going to be really bad songs, so it’s just going to harm congregational singing. It’s going to give us fewer songs that we carry with us in life; it’s going to give us a lower view of life, poetry, theology, all those kinds of things.

The role of a hymn writer is not to write singable melodies. Singable only scratches the surface. Because we are fearfully and wonderfully made, because we are creative people, because we have imaginations, the goals of a melodist and hymn writer are to write music that people can’t wait to sing, that creates a new angle—the same way da Vinci did with his paintings.

Your music seems to reach us in the same way as a good story. Why is that?
We need more than just instruction manuals. I am a repentant sinner, failing father, ineffective brother. God could have given me a manual, or he could have told a story. The story of the prodigal son … opens up areas of my life in a way no manual could have done. … That’s why pastors must illustrate with stories, or things will be dead. Teachers need to find what makes their students excited and feed that into them.

We welcome the Getty Tour
Repairing the Ruins 2016

More information:
The Getty website (www.gettymusic.com)
Facing a Task Unfinished: The hymn and the story behind it
See the interview