Fighting the Naked Emperor: A Review of Live Not By Lies 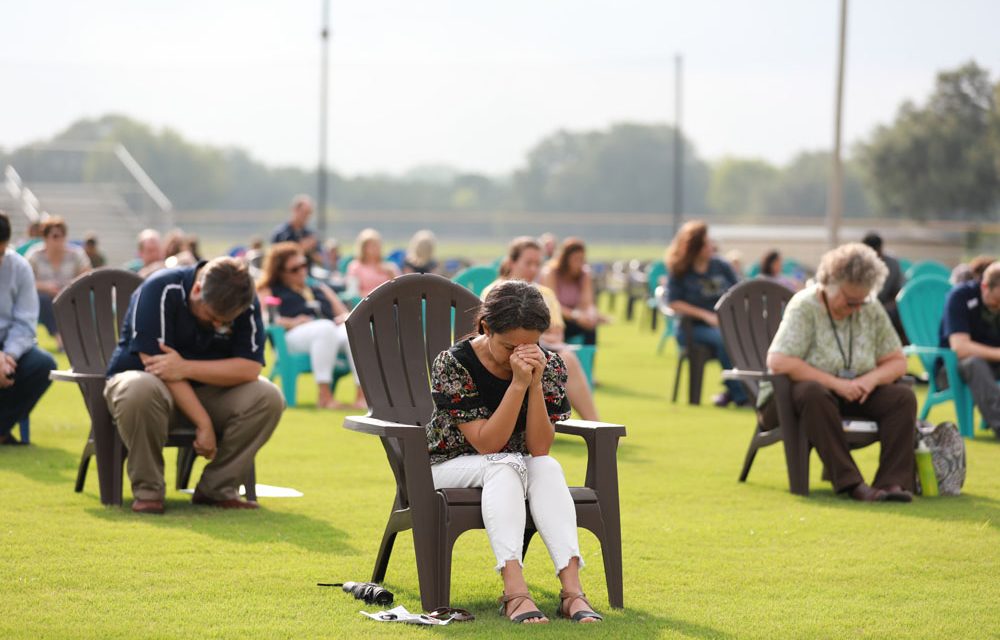 Totalitarianism at Our Doorstep

By TY FISCHER and JOE GERBER

We inhabit a world of lies. They are lies that command high places, and which Christians pay a severe price for transgressing. The most timely of fairy tales for our day is Hans Christian Andersen’s “The Emperor’s New Clothes.” It tells of a boy who had the audacity to see the truth and mention the nakedness of the Emperor while everyone else was praising his “new clothes” or scolding others for not praising them enough. Milton’s Satan provides the wicked “mission statement” of our age:

“The mind is its own place, and in itself
Can make a Heaven of Hell, a Hell of Heaven.” 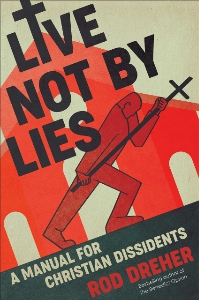 Thankfully, we still have a few courageous men who will help us see the dangers we face and the truth we so desperately need. Rod Dreher is one of those few. Every classical Christian educator, parent, and student needs to read Live Not By Lies and The Benedict Option.

Before diving into the books, a few caveats. First, the better things are culturally where you are, the more you need to read these books because you have more time to prepare for the fight. These books will serve as confirmation for people who see the smoke from Mordor when picking up the paper. For those immersed in nominal American Christian culture somewhere, these books are a healthy slap in the face.

Second, read Dreher’s books in reverse order. Live Not By Lies, his most recent book, digs into the problem that we are facing in the soft totalitarianism championed by the cultural elites. The Benedict Option, published a few years ago, dwells on the solution: intentional, thick, communities that are wedded to the historic Christian faith, mindful of Christian history, and addicted to truth. Both books are riveting.

“The better things are culturally where you are, the more you need to read these books because you have more time to prepare for the fight.

Both of Dreher’s works point readers toward the unvarnished truth. Both state that we have currently lost the culture war. While there are still pockets of Christian culture in communities, the levers of power in American politics, entertainment, art, and industry are, for the most part, no longer moved by Christians. In fact, these switches are being thrown to crush Christians who happen to mention that the Emperor is nude.

Dreher’s warnings are grounded on his study of Aleksandr Solzhenitsyn, whose 1974 essay also inspired the book’s title and its epigraph: “There always is this fallacious belief: ‘It would not be the same here; here such things are impossible.’ Alas, all the evil of the twentieth century is possible everywhere on earth.”

Dreher lays out a compelling case for what he refers to as a soft totalitarianism that is beginning to be more and more prevalent as our liberal democracies crumble under the weight of zero-sum ideologies and fraying social trust. Dreher makes his case by appealing to the striking similarities former Soviet dissidents are seeing in the rhetoric and practices of the progressive left today:

“One of contemporary progressivism’s commonly used phrases—the personal is political—captures the totalitarian spirit, which seeks to infuse all aspects of life with political consciousness. Indeed, the Left pushes its ideology ever deeper into the personal realm, leaving fewer and fewer areas of daily life uncontested. This, warned Arendt, is a sign that society is ripening for totalitarianism, because that is what totalitarianism essentially is: the politicization of everything (39).”

Culture cannot be fixed politically, because politics is downstream of theology and philosophy. We are in a battle between competing religions, those with Christian roots versus what many authors and historians see emerging as the new dominant religion of our youth—highly individualized and mostly pagan religious views based on the temporal rather than the transcendent. Their center of worship is government and their outreach focuses on social change, as we witness “social justice progressives advance their malignant concept of justice in part by terrorizing dissenters as thoroughly as any inquisitor on the hunt for enemies of religious orthodoxy” (59).

Dreher counsels that we sell all for the truth and that we prepare our children to be content with that same bargain. He bases his narrative on stories of people who bear on their body righteous scars. He spends time talking with people in eastern Europe who suffered under the yoke of hard totalitarian communism as he seeks to prepare us for the long battle with soft totalitarian socialism. He champions classical Christian education and the whole-hearted embrace of historical, thick, meat-eating Christianity. His affirmation of classical Christian schooling or home-schooling is full-throated. It is what you have been waiting for your minister to say from the pulpit for the last 15 years.

Dreher calls on parents to begin classical Christian education with the fervor of a doctor in the midst of a pandemic. He is not recommending it because it is one of many options. He’s commanding it because he is tired of seeing the children of Christian families alienated from Jesus, and knows that they must have armor thicker than the tin foil suits most churches hand out today. Dreher writes:

Once you perceive how the system runs on lies, stand as firmly as you can on what you know to be true and real when confronted by those lies. … Refuse to let the media and institutions propagandize your children. … Teach them how to identify lies and re- fuse them” (108).

Is this possible? Dreher looks to models of how Soviet dissidents refused to participate in the lie and prevailed. One of the most inspiring examples is the Benda family, a large Catholic family who suffered in many ways due to their resistance to Soviet totalitarianism in their beloved Prague.

The surviving children of the family told stories of how their parents raised them through the dark days of communist rule. Most notably, their parents sought to fill their moral imaginations with examples of the good, true, and beautiful. They often read fairy tales, myths, and adventure stories, but their absolute favorite was J.R.R. Tolkien’s The Lord of the Rings. When Dreher asked them, “Why Tolkien?” the Bendas responded, “Because we knew Mordor was real. We felt that their story—that of the hobbits and others resisting the evil Sauron—was our story too. Tolkien’s dragons are more realistic than a lot of things we have in this world” (138). Having formed their children’s moral imaginations on stories that conveyed truth and beauty, the Bendas were able to withstand the severe suffering they experienced as dissidents of an atheistic regime.

“He champions classical Christian education and the whole-hearted embrace of historical, thick, meat-eating Christianity. His affirmation of classical Christian schooling or home-schooling is full-throated. It is what you have been waiting for your minister to say from the pulpit for the last 15 years.

According to Dreher, Scruton “emphasizes the importance today of dissidents creating and committing to small groups—not just church communities, but clubs, singing groups, sports societies, and so forth” (179). These little platoons, according to Dreher, are required of Christian dissidents because the lone, atomized individual stands no chance against the forces of totalitarian oppression. In contrast, a fellowship of like-minded truth tellers has the power to withstand much evil.

A QUESTION AND A TASK

There is a challenge in these books: We have to make the education in classical Christian schools thicker, not thinner. We have to do what Lewis recommends in The Abolition of Man. We have to pour God’s Word, Christian history, and great stories into the lives of our young children, forming their tastes, welding the stories of David, of St. George, and of George Washington to their very identities. This happens best in families, churches, schools, and communities that are pulling together. Get yourself to these places or busy yourself building these places.

Finally, the question. It is a question of strategy. Against hard totalitarianism the cost of discipleship typically equalled martyrdom or torture. Still, the brave souls featured in Live Not By Lies counted the cost and set their eyes on another, better place. Against the current and expanding soft totalitarianism is there another strategy, a different strategy? What if enough of us had the courage to stand up and speak now, risking livelihood, reputations, and wealth for the sake of our children, and for the sake of the truth?

At the end of the introduction to Live Not by Lies, Dreher describes a friend who had formerly lived under Soviet totalitarianism telling him that writing the book would be a waste of time. When Dreher asked why, his friend answered, “People have to live through it first to understand. Any time I try to explain current events and their meaning to my friends or acquaintances, I am met with blank stares or downright nonsense” (xvi).

Live not by Lies reminds us of Aragorn and Theoden riding out of Helm’s Deep. My sense is that failing to stand for truth with a readiness to face suffering will cause us, a generation from now, to long for the day when we could come back to this day and look falsehood in the eye, and stand for Christ, truth, our children, and our neighbor.

TY FISCHER is passionate about classical Christian education. Currently, he heads Veritas Academy in Lancaster, PA, and is a board member for the ACCS. You might hear from Ty as he works with a growing network of donors, curriculum providers, parents, and classical educators to further classical Christian education. When he’s not busy fulfilling that vision, he is spending time with his wife and four daughters.

JOE B. GERBER was raised in Boise, ID, a city that he loves and the place he calls home to this day. He currently serves as the Dean of the Upper School at The Ambrose School. Joe also serves as an elder at All Saints Presbyterian Church (PCA). He and his wife, Janice, are raising four boys who are being classically educated at The Ambrose School, which happens to be within rock throwing distance from where they live.