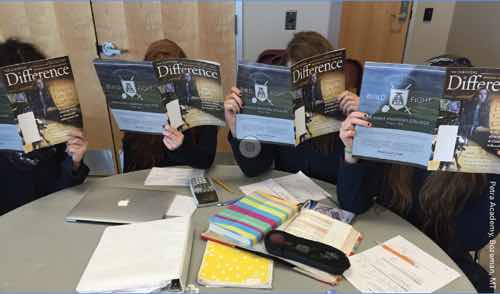 Restoring the Habits of the Heart in American Education

The real fix for

The size and scope of the federal government has ballooned since the early 20th century. The advent of the bureaucratic state erodes the American founders’ original idea of constitutional federalism and wages war on principles of self-government. This has direct ramifications on how American children are educated.

In Democracy in America, 19th century Frenchman Alexis de Tocqueville famously observed that the maintenance of a democratic republic depends on the manners or customs of the people. He coined these manners the “habits of the heart.” These habits must be preserved at the smallest levels of society. But, he warns that “administrative power” may overtake these associations if we’re not careful. His warning has manifested. But there is hope. The parental choice movement in education seeks to regain federalism in education. Efforts to restore the content of that education—the “habits of the heart”— through classical education models can then return.

The first major intervention of the federal government directly into the k–12 system occurred as one of President Lyndon B. Johnson’s war on poverty initiatives—the Elementary and Secondary Education Act (ESEA). ESEA was later revived and became the 2002 No Child Left Behind law in its seventh reauthorization, growing the 31- page document into over 600 pages of federal regulations and $25 million in annual spending. Since 1970, the federal govern- ment has spent over two trillion dollars on k–12 education. The result? Student achievement in math and reading has flat-lined since the 1970s, American students are still per- forming in the middle of the pack compared to their international peers, the achievement gap between black and white students has grown by five percentage points in 2014, and recent data from the U.S. Department of Education show that nearly one in three fourth-graders cannot read at a basic level, only 26 percent of high school seniors are proficient in math, and just 38 percent are proficient in reading.

Adding to this trend of increased cen- tralization, in 2009 the federal government tied $4.35 billion in competitive grants and No Child Left Behind waivers to states who adopted administration approved national education standards (the Common Core).

American education is at a crossroads. One direction continues the trend of centralization. The other direction re- stores the substance and methods that reinforce Tocquevillian habits of the heart. Parental choice in education is achieved through changes in policy at the state and local level that move ac- countability in education from Washington back to those closest to the children: the parents. This is the first and necessary step toward the habits needed for a flourishing society.

The choice movement is booming. There are now 59 private school choice programs operating in 28 states and the District of Columbia. Private school choice measures allow parents to use a portion of the funds that would have followed their child to public school, or a scholarship from a charitable donation, to send their child to the schooling option that best meets their educational needs.

Nobel laureate Milton Friedman conceived the original voucher idea in 1955. In his foundational essay “Free to Choose,” he described an education system where every parent, regardless of income, was able to send their child to a school of their choice with their share of public funding. He understood this to be a prerequisite for “a stable and democratic society,” in which there is “widespread acceptance of some common set of values and without a minimum degree of literacy and knowledge on the part of most citizens.”

But while school choice is needed to restore federalism, classical models of education are needed to restore the values, literacy, and knowledge needed for productive citizens. Classical education provides substance and pedagogy for a functioning, well-ordered society. Its proper role is the development of moral and thoughtful human beings, without which, the American founders and Tocqueville understood, a democratic republic is unsustainable. The public education system has become a product of the administrative state, which is not beholden to virtue, tradition, and character. Classical education, on the other hand, forms the soul of the student in what is true, good, and beautiful.

When Tocqueville visited America he observed that democracy thrived because the nation’s civil associations flourished, by which he meant the schools and churches. It was in those associations that children were taught “habits of the heart.” And it was those habits that, Tocqueville argues, provided for the favorable “maintenance of the political institutions.” America has not yet succumbed to the Leviathan of the federal education system, but it could.

BRITTANY CORONA is a state programs and government relations director for the Friedman Foundation for Educational Choice and formerly was an analyst for the Heritage Foundation. She is a John Jay Institute fellow and a Claremont Institute Publius fellow.

EDITOR’S NOTE: The ACCS, as a member standard, does not permit schools to take money directly from the state (vouchers). We guard our independence carefully. We do, however, support efforts that benefit parents directly, as long as they do not have regulatory strings attached.